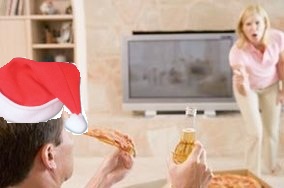 Women are in charge of Christmas.  That’s a fact.  A survey last week, (http://on.wsj.com/t6el57) found that 0% of couples say the man takes the lead for the holidays.  But deep down, men secretly think they could do it better.

A NEW survey found that more than one third of men think Christmas would be MUCH better if THEY ran the show.  Here’s what men say they would change;

1.)  People would be expected to spend less on gifts.

2.)  Family Christmas cards would become rare…. more than half would stop sending them.

4.)  They’d do whatever it took to make the Festive season LESS STRESSFUL.

5.)  And finally, instead of traditional Christmas dinner, they’d serve STEAK and FRENCH FRIES.

I KNOW what you’re thinking. “That’s AWFUL!”, right? But think about this conversation…

“So, Maggie….we bought you that stereo system for your car that you’ve been wanting.  The only catch is that you’re going to have to get someone to fit it, because your Dad’s got to be back on Monday for his prostate examination, and we can’t stay much after tea time. Oh, and thank you for the little card you sent us. Was very quaint. Of course, there’s ALWAYS a drama with us…the card we bought you was WAY too big for the mail room, so we had to get it Fed-Ex’d special. Oh, Daniel is that YOUR parents pulling into the driveway? It is….uhhhhh we just remembered Maggie, we promised we’d call in on your sister and her family. Her husband’s parents are out of town, so she’s a little lonely. Have a lovely Christmas you two. OH FUCK! Look what you just did to your Dad. All your fussing. SHIT!!! Quick, DO SOMETHING! He’s choking!!! Must have got a bit of Turkey wedged in his throat….”

Now, under our masculine, none of THIS crap, would happen. Think about it. Mmmmmm….French Fries…

Check out my site, at http://www.minutesofmayhem.com. I’m @MinutesofMayhem on Twitter

One thought on “Men Think Christmas Would Be Better, If THEY Were In Charge…”