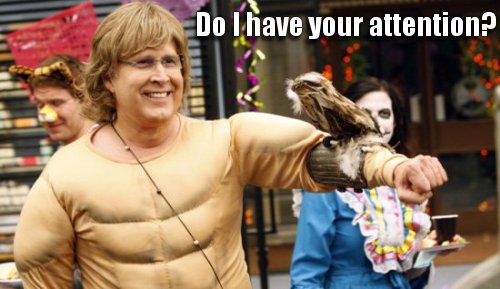 There are very few shows I would say that I love on television. Doctor Who, of course is one. The Colbert Report goes without saying (even though I just did). But, then there’s Community.

Maybe it’s because I briefly went to a community college that has since scrubbed the Internet of a commercial that claimed the “n” in their name is for “knowledge,” Troy and Abed’s belief that they are the stars of their own reality, or Allison Brie, but I found it hard to believe that everyone isn’t watching this show. In fact, so few are watching that NBC is taking the early steps that almost always lead to cancellation of what could be the smartest comedy since Sports Night, only actually funny.

Look. I know I ask a lot out of my readers (see my Movember update at the end), but that’s only because I assume that if you’re reading this, then you enjoy going out of your way for reheated jokes from my twitter account, which means you’re OK with working for your comedy. This time, I’m asking you to watch Community, just once, and see if you don’t fall in love with it for the same reasons I did. 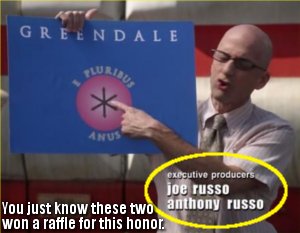 One of the main themes of Community is trying. By that, I mean the actual — sometimes physical — act of trying. From Jeff Winger trying to turn his life around, to Britta trying to be the most progressive and open-minded she can be and to Chang trying to join the study group, nobody tries harder than Greendale and her Dean, Craig Pelton.

Dean Pelton believes Greendale could be the very best college in America, if only …. And that “if only” is what leads to one failure after another. In order to create the most inclusive, non-offensive mascot in college history, he creates the faceless monstrosity that is the Greendale Human Being. When he opens up the design of the school flag to the students, the one clearly showcasing an anus wins.

Even the Dean’s efforts to woo Jeff and Britta are Herculean. If pansexuality were a sport, Craig Pelton would be its Jim Thorpe.

Troy and Abed in this coooool-lumn

Troy and Abed share a reality based on the idea that reality is a (mostly, except for the occasional bottle episode) awesome show, and they are its stars. Almost all of the show’s best bits center on one or often both’s reactions to everyone else’s angst as Jerry and Elaine would to any of the neurotic messes who walk into his apartment. Separately, they are still the strongest characters on the show, which is amazing since they are, at first glance, each written around a single aspect.

Abed has memorized every TV Trope, and uses that knowledge to dissect the episode as it unfolds. While the writers could have easily turned him into The Simpson’s Angry Comic Book Nerd, Abed decides when to use his powers, often in quiet butterfly effect ways. He once spent an entire episode having an adventure that included helping a woman give birth in the parking lot, which happened entirely in the background of the other characters’ story.

Troy is a jock, which was only mentioned once in an episode about the Greendale football team reverting him back to his high school persona. (Nobody knows what happened to the team since, but Troy doesn’t like to talk about it.) He is one of the two youngest characters of the show, having just turned 21 last season, and has all of the requisite naïveté that comes with it, plus more. He is enthusiastic about pretty much everything except for plumbing, which he has an unnatural ability at, but — like football — refuses to explore it further because of racial expectations put onto him and, in his and Abed’s interpretation of the world, his character.

Also, here’s the rap song they wrote for Intro to Spanish.

It’s not my most feminist moment, I know. But, you know what? The male 18-34 demographic is what fills the numbers in ratings, not critical analysis. (Besides, it’s not like you own a television, anyway, right?)

So this is it, gang. Community needs you, only this time, you have to actually watch the show, unlike that whole “Team Coco” fiasco.

Man, I cannot thank you guys enough. As of today, we’ve raised $215, which is about 7 percent of the way to our goal of infinity dollars. I want to personally thank this week’s donors again: Dee Roche, Jenny Slaughter, Nyssa 23 and our very own Bryan McBournie, who took a minute to give (in case you missed it).

If you haven’t given yet because you’re waiting for mustache to really fill out into something presentable, if not handsome, then I’ve got bad news for both of us: there’s only 14 more days to go. Odds are that this thing is only going to get goofier over the next two weeks, much to the chagrin of any potential new employers.

As a reminder, 100 percent of your donations go directly to the Movember Foundation, LiveStrong and the Prostate Cancer Foundation. All I get is a raging better-than-you charity hard-on, which nobody wants to touch because of my mustache.

But I cannot stress this enough: you don’t have to donate to join in the daily fun. You can keep up with my daily growth pictures, journal entries and the wretched prizes I give out at my Mospace page. (I didn’t name it.)

One thought on “Our ‘Community’ Needs You”