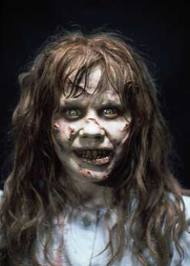 This week I am going to see Paranormal Activity 3. I have prepared for this film. I bought my favorite movie candy, which when shoved in my mouth will stop me from screaming, an extra asthma inhaler which will keep me breathing, and of course, Miss Clairol champagne blonde, which I assume I will need after I return home because if I am to believe what is written, my hair might turn gray.  I don’t know why I want to see this movie especially when it promises that the last fifteen minutes will “ mess up my life”.  It takes so much effort for me to keep my life in order; yet, I am willing to watch that calm disappear for a $12 movie ticket that wants to whisk me to hell.

I know the sane mindset is saying, “Don’t go see this movie.”  But the horror movie fan in me is saying, “I have to see it; in fact, I might need a seat in the front of the theater.”  I love horror movies – no, I love ghost and paranormal movies because I feel safe when I leave the theater. I don’t really believe that some pissed off ghost or demon is going to follow me home. I don’t like gory, crazy killer flicks. I don’t need to see people dismembered or chased down by freaks in masks wielding hatchets, chainsaws or knives.

While I love a good ghost story, I have to say I get befuddled by the people in these stories. For example, the family in FX’s new show  American Horror Story hate their house, but they stay. They live in a house where, of course, the former owner slaughtered everyone. The family is noticing all these weird things going on, plus they become  victims of a home invasion and yet, they don’t move.  The father, who by the way likes to walk around naked, which is a slight plus for the female viewer, insists on keeping his family in this house for financial reasons. He is a freaking psychiatrist. I think he can find another home in a nice neighborhood.

Unlike a lot of people,  ghost stories do not stay with me or give me nightmares. I don’t care about watching people’s heads spin around 360 degrees, and I do not mind when innocent homeowners  get inexplicably picked up and slammed to the floor.  This is the price they pay for staying in demon-possessed houses.

Yesterday, I was watching the show A Haunting, and it featured a kid who was possessed by a demon, which he apparently picked up by the well in the backyard of his sister’s home in Connecticut, which the paranormal investigators claimed was Hell’s backdoor.  Who knew  Connecticut was the site for Hell’s backdoor? Truthfully, I would have guessed Transylvania or Pat Buchanan’s house.  Connecticut was not even near the top of my Hell portal list. The kid’s brother-in-law  claimed that he also saw the demon relaxing in the woods.  For these people, it didn’t matter if they sold the house or not as the demon followed the kid wherever he went.   Eventually, after an exorcism, the demon was gone and the couple sold their house.

I have a big problem with these people selling their home.  They called in the priest and claimed to be so religious; yet, they failed to disclose the portal to Hell on their property to the new owners. Now, I would think as a prospective buyer I would want to know about all demon activity in my backyard. What if I wanted to put in a pool?  Maybe the demons might object to all that digging.

And these people are not the only ones who have sold their homes without telling buyers that their houses are portals to Hell. I saw another episode where a portal to Hell was in a family’s home in Arkansas, and another one where the portal was in Wisconsin. With all these portals, there should be a category on the MLS listing agreement:

Question: Any disclosures or anomalies to the property?  Answer:  Door to Hell.

Anyway, I think I got off the track of Paranormal Activity 3.  I will check out this fine flick of fear and give my unprejudiced and serious review. Until then, don’t go in your attic. It might be another portal to Hell. BOOOO!