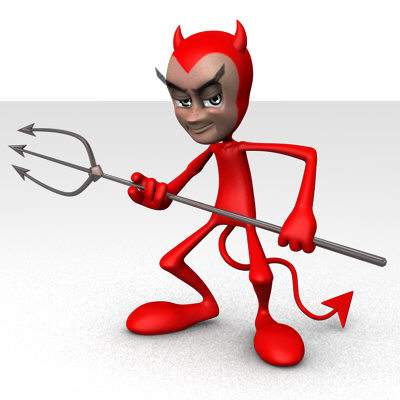 “The devil led me in that direction.”  Yep, that was the excuse a friend of mine’s ex-boyfriend used when she confronted him with his cheating ways. I have to admit that when my friend told me this gem of an excuse, I was stunned by this creative attempt to skirt responsibility. I would have accepted, but not approved of, the usual excuses which include “You don’t understand me”; “I am feeling smothered in this relationship”; and my personal favorite, “It meant nothing to me even though I have been sleeping with her for about a month.”

But the devil thing was a new one, and I have to give this guy credit as this excuse took a lot of chutzpah to utter. Imagine calling in Satan to take the rap. I handed my friend Kleenex, a chunk of chocolate cake, some of the jello shots I keep in the freezer for my girlfriend-in-need situations, and then I sang the traditional break-up song, “He is scum, and you are better off without him!”  But even as I was singing the “scum” tune over and over and doing all the correct post-breakup rituals, I could not help but chuckle at what was going on inside my head. I began to imagine how the devil decided that this guy would be a good choice to prod into cheating. How desperate is the Prince of the Underworld?

Picture the scene:  The guy with horns and a pitchfork is scouring the Earth looking for a dupe to continue his evil work when he spots Joe Schmuck Boyfriend sitting in his truck.

“Ah, this guy looks like he has possibilities. He has that dumb look that hints he might be distracted easily.”

To get his plan moving along, the devil transforms himself into a middle-aged woman looking for romance. When the dupe goes to his local watering hole for a quick beer, he runs into the she-devil, who is waiting to bait the trap.

“Hi, you look like a nice guy. Let’s have sex,” the demonette suggests.

“Okay, that sounds like fun,” the dupe agrees after a millisecond of consideration.

And when the deed is done, the accommodating woman turns back into the Satan we all know and love, and informs the dupe that he has been led astray.

“But I have a girlfriend who I have been dating for over a year!  How could you do this to me?” The dupe asks in horror.

“Don’t worry about it. Just tell her that the devil led you in this direction. She will believe you.”

When I told my now, jello-shot-calmed-friend of my imaginative version of the whole devil thing, she started to giggle.

“So, this idiot is the best the devil can do?” She asked.  “I guess he just preys on the stupid.”
And with that observation, I knew my girlfriend would be okay especially since she admitted that this was the fourth time he cheated on her.  I tried not to look at her as if she was from out of space, but I had to wonder where my friend’s usual good judgment was hiding when she met this guy. I also wondered how the dupe gave into cheating so easily. So, being the intrepid journalist I am, who also had her fair share of jello shots, I called him. Yes, I did. And when he answered, I said in my most professional tone,

“Hey, you are a moron who has no idea what you lost, but that is a topic for another time.  I need to know how you knew it was the devil forcing you to cheat.”

“Well,” and he answered me seriously, “I only cheat when I feel temptation, and temptation is the devil’s tool. So, if I get the urge to cheat, it’s not my fault; it’s the devil’s doing. I am the victim, and she should understand and forgive me.  I can’t help if the devil calls to me.”

Uh huh.  I was now getting a clearer picture of this guy.

“Okay, we may be done here. Have a nice life and you know what?  You are right. You are too good for her. Go find someone else, someone better for you – far, far away.”

He seemed pleased I took his side, and thanked me for my concern. After I hung up, I looked at my friend and said, “Yea.  He really wasn’t good for you. I just have a feeling there would have been a lot more trouble down the road.”

“Really? I am thinking that too. He was fun for a while.”

I could do nothing but nod.  Fortunately, the devil and the dupe disappeared from my friend’s life forever.  Did she mourn this loss of a boyfriend?  For about a week.  She met another nice man who had no relationship with the devil whatsoever, so I feel pretty good about this one.  But just in case the dark prince returns, I have chocolate cake, Kleenex and jello shots ready and waiting.

8 thoughts on “The Devil Made Me Do it”