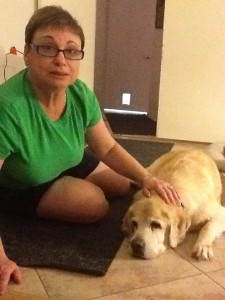 Murphy’s Law—as it applies to dogs—decrees that mis­chievious things will only happen when Alpha Mom is on the phone, in the shower or otherwise occupied. A corollary to this is, the lower the probability of an event actually happening, the higher the price tag for the owner.

At first glance, the latest canine caper appeared more competitive than costly—you might even say a dog-eat-dog game of chess: two large canines circling the family chess board while two smaller dogs in the peanut gallery egged them on. The Collie appeared as if she were about to nose a chess piece to a more strategic location on the pink-and-white onyx board, while the yellow Lab marked time by thumping his tail obsessively as he deliberated his rebuttal. Meanwhile, the two Schnauzers sent cryptic messages to each other with their eyebrows while the Maine Coon, our sole cat, reported for her job as eyewitness.

When your animal family consists of four dogs and one cat, silence is usually a scarce commodity. When it lingers too long, worry becomes the operative word. So after several hours of unsolicited quiet, I peeked, suspiciously, out of my home office. Right away, I sensed something amiss. No bloody paw prints or broken lamps, but sure enough, one of the dogs had pushed past a 3-foot-high, heavy cardboard barrier I had erect­ed to block them from the living room. My longtime fail-safe security measure had let me down.

It wasn’t a pretty sight. Our chess board remained on the coffee table, but chess pieces littered the carpet as if a band of robbers had ransacked the room. When I finally mustered the courage to assess the damage, I saw the usual suspects gazing back at me with their all-too-familiar goofy grins. As if in a police lineup, they endeavored to deflect blame onto the other guy. Heads pivoting, legs shuffling back and forth, they struggled to look noncommittal. But I knew from past experience that appearances could be deceiving. The ho-hum attitude was a blatant attempt at denial. They knew the living room was off limits—hadn’t I read the riot act to them several times already?

What with their records of past crimes, I was sorely tempted to throw the book at them—dispense with a trial of their peers, invoke the three-times-you’re-out law and sentence them to life in the slammer. A daily diet of kibble and water—no biscuits or cookies for those rascals—sounded about right. But first, I would I prolong their agony a bit and investigate the crime scene. Like any other television CSI professional, I ascertained that except for the chess set (obviously torn asunder by a tsunami), the only visible damage was the ton of multicolored dog hairs pasted onto the furniture.

An hour later, I was still searching. Except for discovering some old newspapers squashed beneath the sofa cushions and a few Tootsie Roll wrappers, I was slowly getting nowhere in my investigation. Plus, my activities were beginning to resem­ble housework—something I did reluctantly, if at all.

It was then I had an epiphany—of sorts. The problem was not what the accused felons had left behind, but rather what they had absconded with. I knew enough about the game of chess to deduce that the white rook was missing and unac­counted for. In what I hoped was my best law enforcement and politically correct voice, I asked, “OK, which one of you critters was nutty enough to ingest a chess piece?”

“Chauncey,” the Lab, was the most likely candidate. His 9-month-old rap sheet already stretched several leash-lengths long, warning of an inherited tendency to devour everything in sight. At current count, he had chewed several ballpoint pens, gnawed through two lawn sprinkler heads and wolfed down a pair of raw chicken breasts. And that was just in one week. The word mischievious did not do him justice.

So needless to say I wound up in my vet’s waiting room at 5 P.M. on that Friday night, awaiting the results of X-rays. While leafing through an old copy of Cat Fancy, I was imagining the worst: emergency surgery to the tune of several thousand dollars. Meanwhile, the dog was throwing himself a pity party. With his hindquarters tucked under my chair and his paws propped under his head, he looked as if some bully of a Great Dane had come along and swiped his best bone. A closer observation revealed my Lab puppy was really a study in con­trasts. Although his eyes said, “Help, I’m a prisoner of my own stupidity,” his mouth seemed frozen in an impish smile, as if boasting of rare accomplishments.

“Wait until you see this,” I heard the vet say in an amazed tone from the back of his office. In my haste to confront the consequences of Chauncey’s latest crime, I nearly tripped over my prisoner. An 11″ x 14″ image of the canine digestive tract illuminated the room. Toward the bottom of the X-ray, in what I took to be Chauncey’s stomach, I could discern the unmistakable outline of a miniature castle. Sure enough, there was the missing rook. Without medical intervention, I knew my 60-pound pup could not eliminate the imported hand-carved chess piece.

Looking at my ghostly pale face, the vet could tell I was in no shape to deal with a four-figure surgical procedure, followed by a lengthy recuperation with a young active patient. “I think we can get him to barf it up,” he said, with a devilish smile.

Fifteen minutes later, I, too, was chuckling. Thanks to the wonders of fast-working emetics, the accused had taken re­sponsibility for his crime and confessed. He probably did not feel any better for it, but I certainly did. At $125, divesting the cat—no—dog burglar of his take was a real bargain. Besides, law and order had prevailed.

Standing behind the reception room counter waving the bill, the veterinary technician resembled a trial judge about to rap her gavel. Smiling, she handed over the recently recovered chess piece, which I hurriedly jammed into my pocket. I mum­bled, “Case closed.”

As my faithful friend and I exited through the double doors, I thought once again of Murphy’s Law and other ev­eryday axioms, such as the fallacious, “lightning-doesn’t-strike-twice” one. That’s when I knew tomorrow I’d be making a pink-and-white chess set deposit at Goodwill. Call it crime prevention.

3 thoughts on “Lost and Found (from the anthology NOT YOUR MOTHER’S BOOK ON DOGS (The Publishing Syndicate, 2012)”