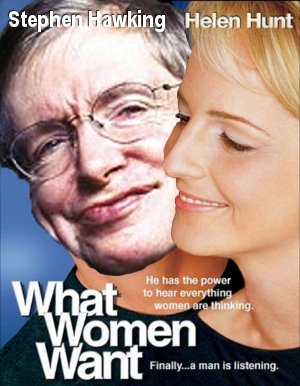 In recent news, the smartest man on wheels, Stephen Hawking revealed that he, too, spends most of his time thinking about women. And I, for one, feel much better for knowing that, because I also find women to be “a complete mystery,” as Professor Hawking put it.

However, I am concerned because, again, if Stephen Hawking — the man who has informed our current understanding of black holes — has yet to unravel the mystery that is women, then what chance do we have of ever solving these riddles. Riddles like:

Women have vaginas, which are holes. This much makes sense. But, how do they keep their insides from falling out when there isn’t a penis in them? Perhaps this explains the penis-shaped plug I found under my wife’s side of the bed. Maybe this is why women always punch me when I ask them to do jumping jacks. They claim it’s because of their boobs, but I’ve seen a few boobs and none of them have ever broken off. I should know; I’m a voracious kneader. 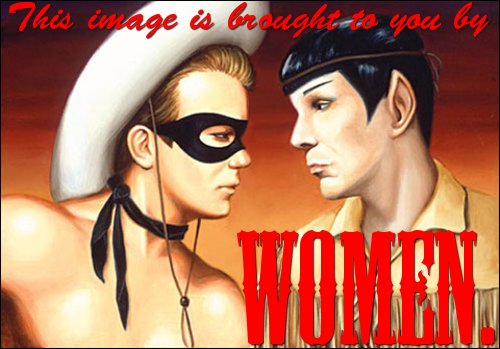 Although not every woman is born with hair, it eventually grows in as either straight, wavy or curly. Women with curly hair straighten it. Women with straight hair curl it. Women with wavy hair will do one or the other, depending on whether they’re going to prom or a job interview. Almost all women, regardless of hair type, will attempt to grow bangs and hate it except for the one day that it covers their forehead correctly. Thanks to the women’s rights movement of the latter 20th century, they can now correct any of this with a ponytail, or as I like to call it: the lady ball cap.

Women are now more likely than men to graduate from college and are the predominant holders of white collar jobs, yet they still make less money on average than their male peers. This raises a question less about women and more about colleges; specifically, do they have math departments?

Every three to four weeks, women shed their uterine lining because they did not get pregnant. This is manifested in bleeding (although blood is only one component of the fluid) up to four to six tablespoons over a period of two to eight days and is sometimes accompanied by irritability, swelling, cramps, fatigue, nausea and breast tenderness. The mystery isn’t that — as Mr. Garrison put it in South Park: Bigger, Longer & Uncut — they don’t die; it’s that they kinda miss this when they go through The Change.

Speaking of The Change … Women have historically put up with a lot of shit from the male gender. If they managed to survive birthing 20 consecutive children, open flame stoves while wearing bustles and Henry VIII, then they were accused of witchcraft and either burned, drowned or crushed depending on their town’s access to wood, water or heavy things. Could menopause have been an evolutionary mutation where they could abandon men entirely by age 40 or 50? And, does the fact that they didn’t instead evolve asexual reproduction prove that, yes, there is a God, and no, he doesn’t like them either?

5 thoughts on “Women are Mysterious”