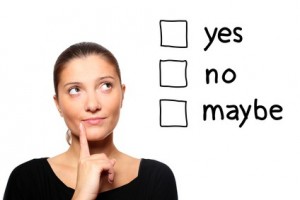 Will America ever vote for a non-believer? How about an agnostic? How about someone who classifies themselves as an atheist? The term “atheist” has a fervor associated with people who protest Christmas mangers and other religious displays or events which quite frankly I find a bit odd. However, I do like someone who can separate the facts from personal religious beliefs. Can America elect someone who professes a lack of religion in their personal life? It is probably unlikely. America is a land of believers and we have a tendency to be very concerned about what each other believes.

I want to feel good about who I am voting for. The ideal candidate should have the proper background, personality, and priorities suited for the office of president. I really do not care what he or she believes. In fact, a candidate claiming to be an agnostic or some similar classification would not be troublesome at all for me.

It is curious that we rarely find comfort or reassurance in what we know. True happiness comes from beyond. Does it not diminish this life when we say that there is something better afterward? Is that what God intended?

When a husband cheats on his wife with his secretary, who also happens to be the wife’s best friend, the betrayed and hurt wife may well find solace in the notion that Jesus will always love her. I can’t imagine there is any harm finding consolation in that manner.

On the other hand there are times when we should rely on our presence of mind. I remember an interview with a motorcycle daredevil I heard a long time ago. He was asked before a big jump if he ever said a little prayer while he was on his way up the ramp. His answer was, “If you are praying while heading toward the ramp you are going to die. Your mind had better be on what in the hell you are doing.”

When the President of the United States makes a decision to send America’s best and bravest young men and women into harm’s way he had better know what he is doing. I do not want the president to have prayed about the decision and to have faith that he is doing the right thing.

Before sending in the troops I want the president to consult all of his top advisors. I want him to check with all of the intelligence agencies. I want him to confer with all of our closest and trusted allies if that is appropriate in a given situation. I want him to review every possible scenario and back-up contingency. After having done these things and before sending members of our forces into hostile situations, possibly to be killed or maimed in the prime of their lives, I want the president to agonize during the final closing moments of the decision. His only comfort should be in knowing that it is the best calculated move that he can make in what is undoubtedly one of the most difficult set of circumstances of any presidency.

Practical analysis should always be the basis for evaluating any issue that either directly or indirectly might make its way through the Oval Office. For example, certain medical advancements are now outpacing our current laws and the boundaries of common understanding. Clearly, the more we know the better.

I have heard many people say that they would not vote for someone who did not believe in some sort of a higher power. I understand the need to be humble but being too empowered by the divine is not so hot either. What country ever went to war without God on their side?

How about a good fact check instead?

7 thoughts on “Would You Vote for a Non-Believer?”