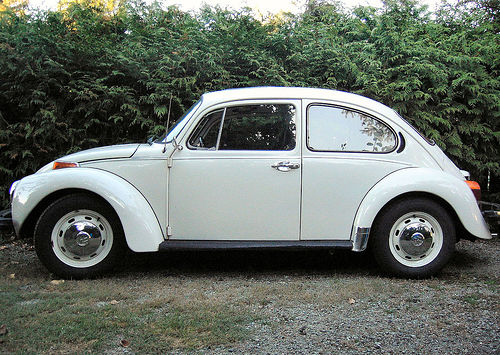 Picture it: a man, a romantic restaurant, a bottle of chilled champagne and that oh, so familiar feeling that something wonderful is about to happen.  If it were normal life, I would say a diamond ring was ready to pop into the picture, but for 63-year-old Edward Smith, the only ring popping up here is a Piston Ring that goes on the engine of his special girlfriend – a 30-year-old Volkswagen Beetle named Vanilla.

Let me back up here (ha ha—get it?):  Smith likes cars, and I mean he LIKES cars. He is what is known as a “Mechaphile”. He only wants to have sex with mechanical things—mostly cars. In his lifetime, he can brag about at least 1,000 romantic encounters that range from a crush on a corvette to an amazing orgasmic Opel moment. He can even brag about a one-blade stand with a helicopter, but now this mechanical playboy has put the brakes on his lust and has decided to park his playboy life and make a commitment to his one true love, Vanilla the Beetle.

I have to wonder what makes a man give up women and/or men and jump to machines.  If one had to pick an unusual  sex preference, one would think animals might be the next step if he were going to go weird, but machines is a hard thing to understand. Hey, I am not a bigot, I think the robot from Lost in Space was cute and the Star Wars machines had charisma too, but gassy cars?  I guess this is something the professionals will have to figure out and by professionals I mean psychiatrists—not mechanics.

But on a more practical note, since he is setting up shop with his Beetle, gifts might be in order.  I wonder where they are registered?  Pep Boys or Jiffy Lube would probably be the most logical places.  And so what would good gifts be?  Those hanging air fresheners to set the mood for those romantic moments might be a considerate token or maybe sheepskin seat covers to prevent unwanted little Beetle accidents from occurring.

Yes, this will take some thinking—lots and lots of weird thinking. In the meantime, I guess all we can do is toast the couple. So to Vanilla and her odd mate, let’s raise a gas can and say: “We wish you a long road of happiness.  May the path be smooth and the potholes rare and may your GPS take you to all the places you want to go. (And don’t trust Apple maps!)”

Is it me or is the world is getting stranger and stranger each day?

10 thoughts on “A Man and His Beetle: What Gets His Motor Revving?”