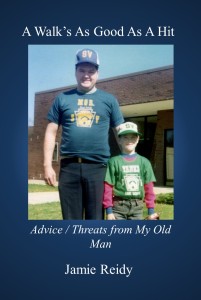 “You’ll Get It When You’re Married”

My old man fancies himself an expert on a number of topics. Just ask him. But relationship advice is a specialty especially close to his heart.

Apparently, getting engaged after just two dates boosts a fella’s sense of expertise.

I’ve heard the legend of my parents’ whirlwind romance dozens of times. But the tale never grows old.

In March 1968, Richie (as he was then known) Reidy sold computer systems for IBM in New York City. At the IBM Education Center on 40th and Park Avenue, he spied an attractive young programming instructor named Loretta. Besotted, he managed to track down her phone number at work. (#Stalker)

My mother agreed to go out on a date. She thought he was a Chinese guy named Richie Lee.

As a teenager listening to the story, I interrupted to ask her if she’d had a thing for Asian men.

I then inquired as to why she’d go out with a man to whom she would not be attracted, and about whom she knew nothing. Her response revealed far more about her habits as a single gal than a mother ever should.

On St. Patrick’s Day, the two IBMers went out. During dinner, the not-so-Chinese Richie told Loretta he was going to marry her. She questioned his sanity.

A week later, on their second date, he proposed. She accepted.

Legendary Yankees relief pitcher Mariano Rivera could learn a thing or two about closing from my old man. Eight months later they were married, and, two years after that they had me.

In high school, he dated a girl who asked to wear his class ring. He obliged. She read the inscription on the inside: Richard T.D. Reidy.

The young lady asked what the initials stood for. Dad replied modestly, “The team gave it to me.”

His cutie beamed, quite pleasantly surprised to have a gridiron star as her beau. One problem: he never played football. “T.D.” stood for Thomas Daniel, his middle and Confirmation names.

With those kinds of natural skills, it’s not surprising that my old man got the girl of his dreams to agree to marriage after only two dates. And without an engagement ring!

After Mom accepted his proposal, she told him to save the money he would’ve spent on a diamond and put it toward a down payment on a house, instead. Despite hearing this story numerous times, I’d never before noticed that my mother, in fact, sported a sizable engagement ring.

She shrugged with a smile. “Hey, I told him once. If he’s dumb enough to still buy me a ring, I’m not going to turn it down!”

That wouldn’t be the last time Rich disobeyed Loretta’s instructions when it came to money.

Despite leaving IBM for Wall Street, he ceded control of the family finances to his numbers genius of a wife (see: later “800 on the math portion of the SAT” mention).

Throughout my childhood, most of their disagreements that I witnessed centered around cash, but not in the typical we-don’t-have-enough-of-it way. No, my folks argued over accounting.

For those readers under age 35, let me explain that in the Dark Ages prior to ATM’s, you had to literally walk into a bank to get money. After business hours, people in need of dough wrote checks at their local grocery store (or bar) for more than the amount of their purchase and received the surplus in cash. My Grandpa, Steve Reidy, had this maneuver down to a science.

Mom and Dad ran into him on the checkout line at the A&P supermarket one Friday evening. On the conveyor belt he placed a six-pack of beer, a roll of toilet paper and a bottle of prune juice… and wrote a check for $100.

His youngest son wrote checks all over town, but never recorded the amounts. This led to the aforementioned domestic squabbles.

I can still picture Mom sitting at the dining room table, surrounded by cigarette smoke as she paid bills and attempted to balance the checkbook.

Dad would be in the kitchen fixing a snack or downstairs watching television and eating a snack. Regardless of location, his eyes would dart back and forth like a rat seeking an escape route.

My father would inhale deeply, sounding like a sommelier taking wine in through his teeth.

“How hard is it to keep track of a few checks?!”

This question never got an answer. And Rich would spend the rest of the evening in a room far from Loretta.

Once I asked him why he didn’t simply jot down the amount of each check, so he could provide it when asked and, as the result, stay out of trouble.

He looked over each shoulder, a surefire sign he was letting me in on something conspiratorial. I loved when he did that.

“Jamie, this is the only control I have left.”

“—You’ll get it when you’re married!”

That I didn’t understand at all.

During my sophomore year of high school, Loretta decided we needed to build a vacation home in Pennsylvania’s Pocono Mountains. (Residents of NY, NJ, CT and PA will understand when I say that my initial reaction to this news was singing the jingle from a 1970s ubiquitous television commercial: “Beautiful Mount Airy Lodge…”)  Theoretically, we’d use the property four or five weekends a year, while renting it out the rest of the time to cover the mortgage. Rich agreed to this venture, but only if his wife took full responsibility for the project.

She agreed, going so far as to design the house herself. This was a curious decision, since she knew as much about architecture as she did professional wrestling.  (When Carmella started building her spec house on “The Sopranos” I couldn’t stop chuckling at the similarities between her and my mother.)

During one mid-completion site visit with my father, he pointed out to me several potential flaws in Mom’s plans. “That’s gonna cause a problem if people open both bedrooms doors at the same time,” etc.

He explained that he wouldn’t be telling her about the issues. I gaped at him, dumbfounded.

“Jamie, I just write the checks. This is your mother’s project.”

“Yeah, but Dad, won’t those things end up costing more money and time and—“

“—It’s your mother’s project.”  Off my still confused look, he added, “You’ll get it when you’re married.”

Again, I could not wrap my brain around that concept.

I did recognize, however, that my folks had a more loving relationship than most of my friends’ parents. But I didn’t realize their love continued to burn like phosphorous years later.

During my freshman year of college, Jamie Herstein, a friend since kindergarten, stopped by my parents’ house unannounced to say hello. He knew I’d already returned to Notre Dame for second semester, but his substandard university (Michigan) had a different academic schedule.

He introduced his girlfriend to my mother for the first time. Meaning: it was the initial occasion on which Loretta had met this one or any other gal Jamie had dated. He was clearly head over heels.

Mom called me afterwards to issue her report. “They are so in love,” she gushed. “He looks at her just like your father still looks at me.”

I furrowed my brow. “How does Dad look at you?”

Ah yes, the first time they met. What a romantic tale. Too bad it ruined me for life.

You see, that charming story had an unexpected negative consequence: it set the bar. Not that my parents ever said so, but somehow I created the notion that anything more than two dates was substandard.

Thanks to Rich and Loretta, I thought it was normal to “know” by the time the bus boy cleared the appetizers. That put just a little bit of pressure on a first date.

It also placed an unhealthy amount of significance on superficial traits. I mean, what else did I have to go on during those initial fifteen minutes?

It would not be possible for me to list all the Seinfeldian excuses I had for dumping women. But an early 1997 conversation with my roommate Steve Egan regarding a female employee of his typifies my shallow reasoning.

JAMIE: You know that scent she has?

My mother grew alarmed over my inability to maintain anything resembling a relationship. My father grew increasingly confused. And aggravated.

“I just don’t understand what the problem is!”

“What makes you think I have a problem?”

“Pfft! You date all these women, but none of them are good enough for Mr. Wonderful.”

“Yeah, and I’m having a blast while your mother busts my balls about why we don’t have grandchildren and how it’s all my fault.”

“—See! That’s just it.   You don’t understand. But you will once you get married.”

For Thanksgiving 1999 I flew from where I was living in central California to my folks’ house for a week’s vacation. On Tuesday night I got beers with a female friend who lived nearby.

“Lori” was attractive, smart, successful and a lot of fun. She and I had played a little kissy face the previous year, so it wasn’t much of an upset that she invited me for a sleepover.

Although Lori had correctly predicted on a bar napkin, “East Coast – West Coast…how realistic is that?” we began dating long distance. That was my first mistake.

But the bigger blundered was informing my parents of this development. Having a relationship with a Westchester County woman placed me in perfect position to accomplish Mom’s Two Main Goals: a) get Jamie married, and b) get Jamie back to the New York City area.

Loretta Reidy may have contacted a realtor the day she learned of this budding romance. She definitely started knitting baby booties.

Lori and I spent a lot of time together when I was home again over Christmas, and then she joined me in Lake Tahoe for New Year’s. A month later, we skied Park City, UT on the annual Western trip I take with friends from South Bend. I could not believe how well things were going relationship-wise. More importantly, I saw no reason to sabotage our progress. That was unlike me.

So, I began actively pushing my sales manager to get me promoted back to Pfizer’s training department, not-so-coincidentally located in Westchester, NY.

At the end of February 2000, I flew back to New York to spend a weekend with Lori. We drove to my parents’ house for drinks prior to going out to dinner with them. This would mark the first time I’d ever double dated with Mom and Dad…