Two Stanley Cup Playoff teams, both alike in dignity, in the Steel City where we lay our scene.

I had a near “meet-cute” at Game 1 of the Pens/Bruins Stanley Cup Playoff Game when I was seated next to an attractive hockey fan at the Consol Arena. Good looking? Check. Presumably straight? Check. Pens fan? No. 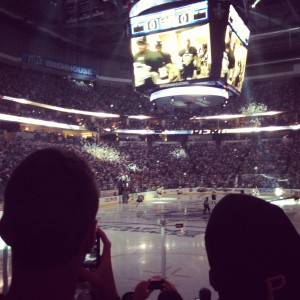 Elbow to elbow, we sat next to each other. Rival teams, rival families. His father frequently yelled for Matt Cook’s head, my uncle that Bergeron just plain sucked. We had so much going against us already.

During breaks in play, I wanted to ask him questions. Who’s your favorite player? What do you think of the Hawks/Kings series? Wanna father my children? But there never seemed to be the right segue. Instead, we engaged in mindless chitchat while I tried to lean closer toward him, holding out hope that the cameramen might think we’re together and feature us on the Kiss Cam.

Not to say that my head was completely in the clouds. When he stood up and pointed proudly to his jersey after Nate Horton’s goal, I did contemplate giving him a swift kick in his Bruins. I soon realized that maybe our backgrounds, our NHL upbringings, were too much to overcome.

At the end of the game, we went our separate ways. It would have never worked out anyway. I realized it’s very rare for two people to be together and be vehement fans of rival teams. Not everyone can be James Carville and Mary Matalin. And I bet even those two have the common sense to root for the same sports team.