Elliston by Jason Elia has wowed the toughest critics.  HumorOutcasts Press is proud to have it on our title list. Jason has a true talent for inventing gritty stories that take the reader’s breath away.  Elliston is the story of an indie rock band finding a home in the country music capital of the world, Nashville, Tennessee. The story is one of love, self-destruction, despair and triumph.   Enjoy this excerpt from Elliston which is available on Amazon.com 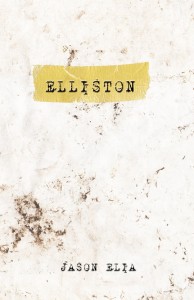 The trip from Los Angeles to New York was a book of adventures, attitude and latitudes in and of itself.  They argued, they sang, they slept, and it was Conner and Harris that did all the driving.  When Benjamin wasn’t complaining, he was sleeping. They drove mind numbing mile after mind numbing mile.  It seemed that flying, which was offered to them as an option, was not something that Benjamin was ‘up’ to. Conner made careful note after note.  He fully intended to write a book about this one day, and from the way the notes were stacking up, the trip from California to New York was going to be a volume in and of itself.

Their arrival in New York was nothing to write home about.  Benjamin was in a mood and none of them had been in a city quite like this one.  The traffic was a nightmare; the parking was a horror film.  Finally, they arrived at the studio, met Jeff Bebe and were pointed to a two bedroom apartment, to lay their heads and a parking garage six blocks from the apartment.  Harris was like a kid in a candy store, and to keep all peace and maybe get some for himself, Conner let the other two have the bedrooms, he occupied the couch.

On their first night in New York City, Jeff and his wife took the three to an upscale restaurant.  It was small talk all the way around as they placed their orders and sipped their drinks.

Taking a deep breath, Jeff was the first to speak at all about business, “I am going to cut to the chase.  The only reason I agreed to produce your album is because I heard your first album and in one word it is “great” for a shitty little indie label.  However, I and you, on this, your freshmen big league effort, are going to be epic.”

Harris looked up, “But, I already am epic.”

“No, no. I like that attitude.” Jeff said raising a hand at Benjamin’s protest. “That’s what it takes to be great in this industry.  All this humble crap you hear from the big names in this business is shit.  Just plain old horse shit.  I promise you, all of them have the same attitude when the cameras aren’t around.  Trust me I should know I am one of those arrogant assholes.”

With that, everyone relaxed and the meal was a calming success of business mixed with getting to know you pleasure.

Later, back in their little apartment Conner, Harris and Benjamin sat around the living room passing a mirror with lines of welcome to New York coke.  Each took a healthy snort before Harris laid the mirror on the coffee table.

Conner leaned back and let the words, “Epic, huh?” float freely from his mind and out of his mouth.

“That is what the man said,” Benjamin said lighting a cigarette.

“I like it.  Epic should be a song we write just for the occasion, maybe it should even be the album’s title,” said Harris as he lay back on the floor.

Conner was more contemplative, and his next thought showed that, “It’s a nice idea, a wonderful thought.  Epic.  But honestly how many epic bands are there?”

Benjamin leaned back and looked up following a smoke ring as it floated toward the ceiling, “The Rolling Stones.”

Conner looked over at him, “Really?  I mean are they truly epic? Or is it that they just lasted the longest?”

Harris rose up on an elbow, “I think The Kinks are epic.”

Conner looked over in his general direction, “True.  I mean no disrespect to Jagger, but how many other bands has he truly influenced?  The Kinks though……”

Benjamin spoke as if to no one at all, “Beach Boys.”

Harris broke into a huge grin, “I love the Beach Boys.”

“Me too,” agreed Conner.

Harris was the next to pose a question, “So does that make them epic?  The fact that we all love them?”

Benjamin and Conner looked to one another.  There was a moment of silence as if everyone wanted to pause and give this question serious thought before answering. Finally it was Conner that broke the silence, “If you go by Jeff, we’re ‘epic’ enough to declare others epic.”

Harris sat up and looked at Conner, “Then damn it, I declare MC Hammer epic.”

All of them smiled, and Benjamin looked at Harris then over to Conner. “I hereby declare Harris to be an epic fuck-tard.”

They all laughed, “And I humbly accept your declaration.  You give out so few…… so Benjamin, what did you think about Jeff’s wife?”

Harris looked over to Conner, “Conner?  What did you think?”

“I have no opinion.”

Benjamin looked over at Conner, “My god, Gina has you whipped.”

“Shut up Benjamin, I think it’s sweet the way Conner feels.  Does my heart good.  Besides how is it any different from your and Danny’s former relationship?”

Benjamin gave Harris the dirtiest of dirty looks.  “So, I got her number.”

Conner looked over, “Whose number?”

Now, it was both Conner and Harris who cut sharp dirty looks to Benjamin.  Harris was the first to speak, “To be clear, are you talking about Jeff’s wife?”

“Have we met any other Anitas?”

“You fucking asshole!” Conner got up from the couch and walked over to the window, “There’s nothing dumber that you could’ve possibly done.”

Harris looked from one friend to the other, “Okay.  Seriously, for a minute, let’s all be serious.  I am the king of…. Well let’s just say that I make a lot of bad choices when it comes to the ladies.  But shit man.  If you use that number.  It’s going to be a bad choice. Not just for you but for all of us.”