The last time I enjoyed myself was at the “1987 Brussels Convention Abolishing the Legalization of Documents between the member states of the European Communities”.  I ripped up as many documents as I could lay my hands on and that coincidently was the last time that my parents seen the deeds to the family home. When you’ve been at such a life changing gig, it’s hard to get excited about anything except a hair cut from a Danish woman dressed as a Swedish woman dressed as a Danish woman with a Swedish uncle who sells mouthwash and shampoo to the hotel industry at 45% discounted rates.

Jill Y’s friend “Fabulous George”, likes to point out the absurdity of the world we live in. Not only is he making his point on a board outside a bar, he’s color coordinated too: 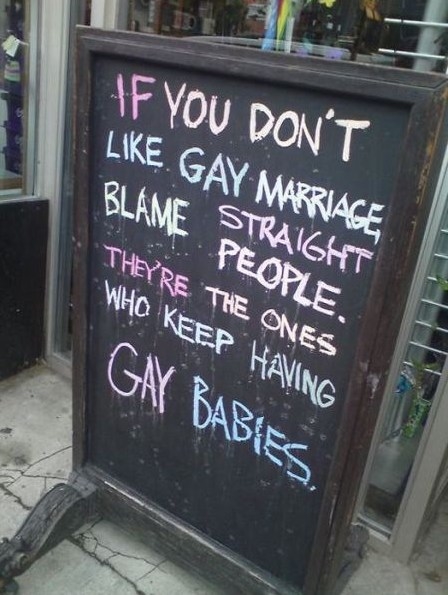 10 thoughts on “If you don’t like gay marriage, blame straight people. They’re the one’s who keep having gay babies.”