HumorOutcasts Press is proud to announce the release of  An Incurable Disease: Memories, Observations and Rantings from a Baby Boomer Cub Fan  by Frank Mucci. In honor of the big launch day, we present to you, the real Frank Mucci – well, as much as he will air in this short interview. However, he will be my guest on HumorOutcasts Radio on Sept. 11th and you will see a lot of him on HO too.  If you are a Cub fan, baseball fan or just a person who appreciates a good rant, this is the book for you!  Please check it out! 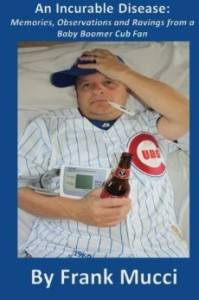 Tell us about Frank Mucci?

I was born in Chicago and raised on the mean streets of white suburbia. I had perfect parents and great siblings and a really happy early childhood. At age twelve, my happy world came tumbling down when my dad died of a heart attack. I kind of climbed into a shell after that and became very shy and cynical. I hated school—all I cared about was sports and girls (all girls cared about were guys other than me)—and made little effort to excel, but I got by because I was smart. After graduating, I went to college for one semester and flunked out because I was a horseshit student with no ambition. After a couple months I was hired as a computer operator and it was through that job that I met my wife.

We worked for the same company, but at two different offices located 150 miles apart. We would talk every day on the phone and eventually the phone calls were less-and-less work-related and more-and-more personal. I found myself falling in love with the voice on the other end of the line and actually proposed marriage before we had ever met—pretty ballsy move, wouldn’t you say? She didn’t say no and after eight months of phone dating, we decided we should meet face-to-face, seeing as how we were getting married and all. Neither one of us puked when we saw each other for the first time—in fact she was the hottest chick I’d ever seen—and so we agreed to go through with the wedding. Four months later we married on my wife’s birthday and we’ve been together 37 years. We have three fantastic children (two sons and a daughter) and four beautiful grandchildren (3 boys, 1 girl). They make me smile every day.

Career wise, I like to think of myself first and foremost as a writer, but a few bucks here and there writing articles for various web sites doesn’t pay the bills. Grudgingly, I get up every morning for my day job in the vibrant world of information technology. By vibrant, I mean mind numbingly dull. I haven’t given up hope that I will someday be able to write full time and be a rich and famous author, but then I haven’t given up hope of waking up one morning and finding I’m a foot taller too, so there you go.

When did you begin writing and where have you written?

I started writing relatively late in life. I think I’ve always had a writer’s mind, but I hated school and so I didn’t develop my writing ability until many years later. I was in my late forties when I started taking college courses both on campus and online on my way to finally earning a college degree. It was while I was in school that I discovered that I had writing talent. One of my instructors even said I should write for a living, which was all the encouragement I needed to start banging away at my keyboard every chance I got. In 2004, I wrote a couple articles that were published in print by HumorPress.com. A couple years later, I started writing humor pieces for Associated Content, which was great. They’d publish anything I wrote, no matter how crude and offensive it may be. Such freedom! But later AC became Yahoo! Voices, where they started rejecting my articles, so I became frustrated and stopped submitting them. All the articles I wrote for AC/Yahoo! Voices are still there and I still get paid a couple bucks a month for page views. I have also written a few articles for a site you may have heard of, HumorOutcasts.com, where I can be crude and offensive again, but my brain has kind of run dry, so I haven’t published anything there for a while. I hope to get back at it shortly.

How long did it take to write this book?

Way too long. I started writing it in 2004 as a way to deal with the bitter disappointment of the Cubs’ 2003 post-season collapse. My first draft was completed late that year and I started shopping it around to various publishing houses. Only one of them showed any interest at all before turning it down. I did some editing over the next couple of years and shopped it around again receiving more rejection letters. I don’t handle rejection well, so after a lot of uncontrollable sobbing, I just gave up. Then e-books were invented and I decided to self-publish a Kindle version—at least I’d get it out there. I rewrote many of the chapters, added a bunch more chapters, purged others and edited everything making major changes to the point where it is now very different from the original draft. It’s been available on Kindle for the past year with very limited success. I have received three reviews—all very positive. I plan to find those three people and see if they’d like to get together… maybe have a drink or two… maybe an orgy… you know, just to say thank you.

Were you born a Cub fan?

As I say in the book, I had no choice; I was born to be a Cub fan. My parents were Cub fans, my siblings were Cub fans—I had no choice. And once you let the Cubs in, you are infected. It’s an incurable disease, which, by the way, would make a great book title.

Would you ever root for the White Sox or is that really taboo?

Maybe if they were playing against Al-Qaeda, and even then I’d have to think about it. But actually because of interleague play it’s possible that I would have to. If the Sox were playing, say, the Cardinals late in the season and the Cubs were battling St. Louis for first place or for a wild card spot, I’d have to hope the Cardinals would lose, which technically would mean I’d be hoping the Sox would win. But I’d definitely have to take a shower afterwards.

If anyone in your family were a White Sox fan, would you disown them?

I wouldn’t have to disown them because I would make their lives so miserable, they’d run away. Luckily, I married a Cub fan and our kids are Cub fans and their spouses are Cub fans and our grandchildren are Cub fans, so no need to disown anyone yet—at least not for that reason. My sister did marry a White Sox fan and we have learned to accept him, but he’s not your typical obnoxious, insufferable Sox fan. If he were, it could have been ugly.

Do you think the Cubs will embrace this book or ban you from Wrigley Field?

I would hope they’d embrace it, but if they did ban me from Wrigley Field, it would at least mean somebody in their organization bought it and read it. Cha-ching! But I don’t see anything in this book that could be interpreted as negative towards the Cubs. Beneath all the anger and frustration and the fact that they drove me to heavy drinking and mental illness is an underlying theme of love for my Cubbies.

Who is your all time favorite Cubs player?

This is gonna sound pretty stupid and maybe a little scary, but my all-time favorite Cubs player never actually existed. His name was Stolley Walls and his creation by my fertile mind was one of the early signs that perhaps I had some mental issues. Stolley was a great ballplayer and he could do everything—hit, run, field, throw, pitch—better than anyone else in baseball. I’m convinced that had Stolley actually played for the Cubs, they would have won a number of championships, but alas, we’ll never know.

However, if you insist that I select a Cubs player who actually existed, let’s go with Ernie Banks.

What is your all time favorite Cubs moment?

I think any baseball fan’s all-time favorite moment would have to be when they had the joy of seeing their team win a World Series. But in order for that to be true for me, I’d have to be dead. So with those bothersome world championships wiped off the board, I’ll have to dig a little deeper and go with the game in which the Cubs won their first pennant of any kind in 39 years. That was on September 24, 1984 when the Cubs beat the Pirates in Pittsburgh to clinch the National League Eastern Division pennant. I was naïve enough to think the Cubs were on their way to winning it all that year. But that didn’t fucking happen and it hasn’t fucking happened since, either! It’s pretty sad that remembering my all-time favorite Cubs moment makes me twice say the word “fucking,” isn’t it?

6 thoughts on “Meet Frank Mucci, Author of An Incurable Disease:Memories, Observations and Ravings from a Baby Boomer Cub Fan”