A new study by The Institute for Informed Discrimination has determined that the upper income fifty to seventy year-old heterosexual white American male is the most reviled creature in the universe. This is the first time in the 50-year history of the study that a human has topped the list of most repulsive, revolting, disgusting and useless creatures, beating out the Mosquito and the Deer Tick for the first time. 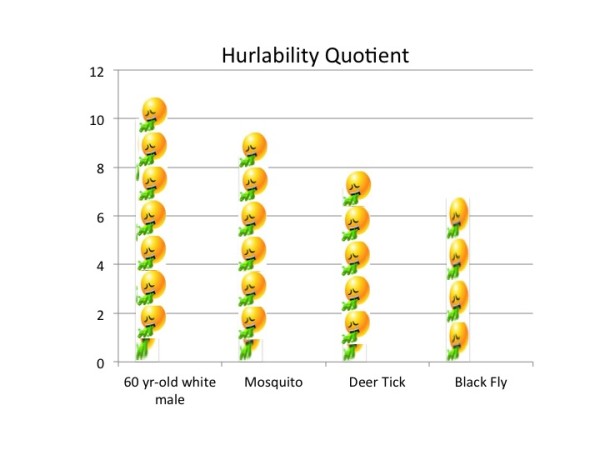 Scientists, sociologists, anthropologists and proctologists were not surprised by the results of the quinquennial study, pointing to a variety of irrefutable data points, probably the most significant being the preponderance of man-boobs on straight white guys in what is also characterized as the “boomer” generation.

“It’s one thing for a transexual to have some nice womanly boobs retrofitted because, frankly, there are a lot over really nice aftermarket boobs for men out there,” reported Dr. Norbert Shuffles, the American representative on the international research team. “But flabby masses of hairy flesh topped with swollen, cracked nipples will cause a gag reflex in people from around the world.”

One theory for the high percentage of boobs in this particular group suggests two primary causal factors, the first being the popularity of swim teams in the late fifties and early sixties that led to oversized pectoral muscles. When these muscles lose their firmness, man-boobs result and the only way to get rid of them is to continue to swim 1-3 miles daily, which would be a crippling amount of time away from key phone calls this group needs to make to continue to rape and pillage the world economy. The second is the mass addiction to testosterone-killing drugs, most notably opiate painkillers, benzodiazepines and expensive vodka. A former competitive swimmer that takes to washing down oxys with Grey Goose is likely to end up with terrifying rack of fuzzy pink flab.

Other factors adding to the straight white American “boomer” male’s hurlability quotient are:

Naturally this combination of factors has made this group of males dreadfully unattractive to women of all ages. Nonetheless these lonely, sorrowful, large breasted bastards remain the single most powerful economic force in the universe.

“There is always a risk of an adverse reaction from the group that has been identified as the most repulsive, however mosquitos, deer ticks, nematodes, banana slugs, rats, potato bugs and other nasty creatures generally have not had the resources to mount a coordinated campaign of revenge,” said Dr. Shuffles. “Not so with this gang.”

Despite Dr. Shuffles words of warning, he also had some encouraging words: “These boomer cowboys won’t be around forever – at some point those man-boobs will be pushing up daisies or better yet, grilled up hot n’ juicy. Also keep in mind that mosquitoes and deer ticks suck blood because they need it to live, not because they need it to make a living. So I would say this to the 45 go 55 group: you’ll have to work pretty hard to screw this up! ”

*when the belly has done lapped over the belt.

6 thoughts on “Rich White U.S. Boomers Shown to be Most Repulsive Creatures in Universe”