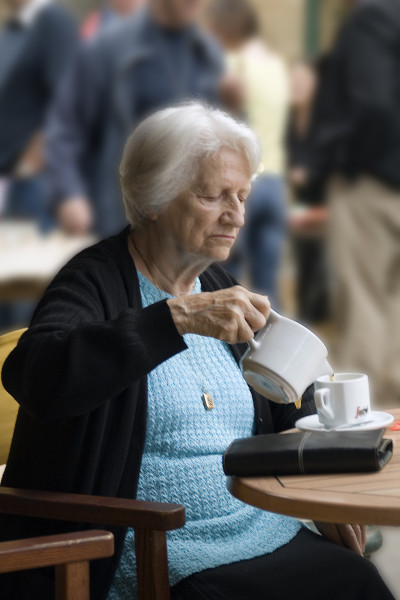 DISCLAIMER: This is not a scientific article. I, the author, am just an aging Baby Boomer doing some minimal Internet research, spouting off some personal observations, and maybe even making a few things up. I wouldn’t put that past myself. Feel free not to believe everything I say.

People have often told me that I am unusual. Sometimes this is a polite way of saying that I’m batshit crazy. More often than not it’s because, despite the fact that I am in my 60s, I love computers and other gadgets, use my mobile phone number as my main contact number, prefer email and text messaging over phone calls and have a great time playing with my iPhone when I’m in the mood.

To many of my contemporaries, and almost everyone who is older than I am, computers are wormholes into an alien dimension with a strange language and incomprehensible customs, where people don’t know how to spell and the natives have names like “hot stud guy,” “genius2894” and “all glammed up and nowhere to go.” Email, they say, is just another way to keep people from connecting with one another, and why should they order their orthopedic shoes online when they’ve been successfully ordering things from catalogs since 1950? If you point out to them how fast, easy and safe it is to order merchandise online, they are likely to take great umbrage and say, “Well, I won’t do that!” The look in their eyes tells you the discussion is over, and you are wise to take the hint, especially if they accompany their declaration by slamming a fist on a table.

The other day, a student came to my desk in the university where I work, needing help with registration. He had an iPad with him. I hope that he was impressed when I, old enough to be his grandmother, took his device, deftly used my fingers to enlarge the image on the screen, and used them further to bring up a web page he needed to access to find a class he wanted to take. What I didn’t tell him was that I only learned to do that a few months ago, when someone was showing me how to do the touch thing to surf the cool stuff on my iPhone. Some of the older professors can’t do that. Chalk one up for me.

My brain hasn’t stopped working just because it’s 67 years old. (Neither have I, but that’s a whole other story.) I have to be forced at gunpoint to do physical exercise, but dammit, I am going to work those neurotransmitters and synapses until they beg for mercy. This includes cramming as much new information into those neurons as possible. Normal brain shrinkage is no excuse. As long as nothing explodes, I’ll be okay.

The thing about gadgets that require brain power to operate them is that we oldsters think we have to have a reason to buy them. Youngsters don’t have that problem, as the following table illustrates: 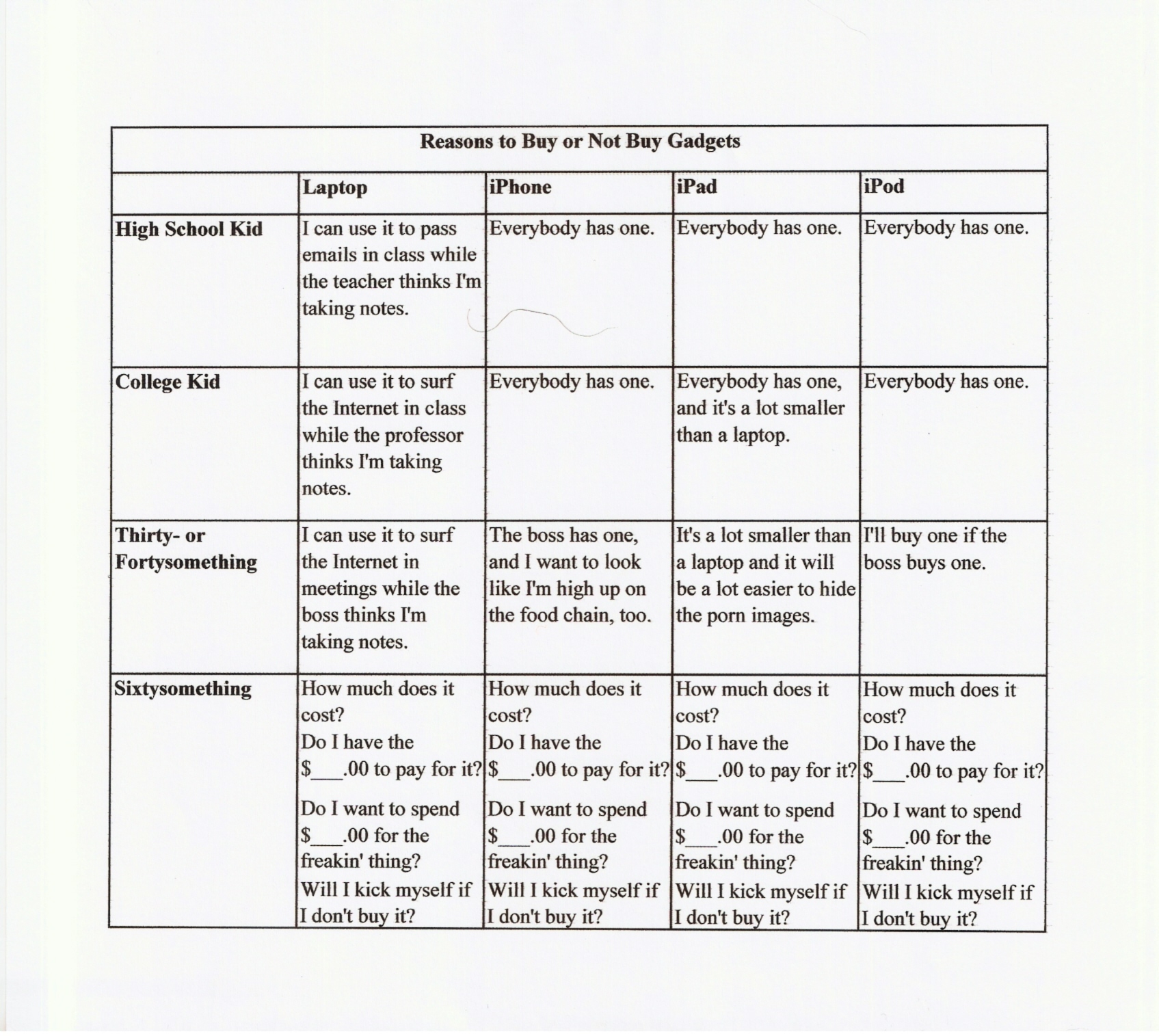 An additional concern for the sixtysomethings is how long the thing will sit around unopened until the buyer finally gets around to opening the box, reading the instructions and taking time to figure the thing out. Younger people have the advantage of technologically savvy peers to help them. It’s hard to get peer group help, though, when a large number of your friends are people who grew up with dial telephones, black and white TV, snail mail and manual typewriters and who tend to rebel against anything they haven’t been using for the last 20 years.

Speaking of rebelling against anything new, scientists and everybody else have been telling us forever that it gets harder to learn anything new as you get older. For some people, this is true. I tend to think that exercising the brain keeps it in good working order, as long as you are otherwise healthy. Some pretty smart people must agree with me, because they are now saying that older brains aren’t necessarily rusty ones. To help us keep those neurons oiled, they are even coming out with all kinds of brain games, such as the ones you’ll find here: AARP Free Online Brain Games Warning: some of these games can be addictive.

I think I’ll stop now and go off somewhere and see if I can learn something.

6 thoughts on “The Aging Brain, or Why Your Otherwise Intelligent Grandmother Can’t Figure Out the Internet”