I’m a big fan of vanity license plates. I remember clearly the day I sat in traffic behind a guy with a plate that read BMR*FVR. Traffic was clogged up by cars that had tried to make it through a red light but failed, thereby blocking the intersection. The Beamer-Fever guy in front of me waved his hands in the air and raged at his windshield in utter powerlessness. It was hardly the automotive experience he envisioned when he bought the car. But it was fun to watch.

The other day I saw a picture of a plate reading WAS*HIS. I laughed, but not in the “gotcha,” Sex In The City way I was supposed to. No, I instantly thought of how this plate would probably backfire:

* If the owner plows through a crosswalk, injures a pedestrian, and tries to flee, she will be easily recognizable. Which plate are witnesses going to remember – one reading 167*HXY or the one that says WAS*HIS?

* Say goodbye to future dating with this license plate. It’s the automotive equivalent of having a swastika tattooed on your forehead.

* The plate is a magnet for thieves. What teenager or sports-bar owner wouldn’t love to have it hanging on their wall? One day the owner will walk up to her car and see the plate replaced with a rectangular piece of paper that reads FUK*EWE. 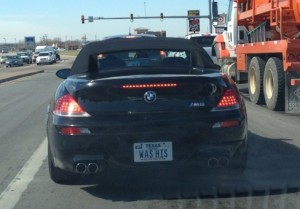 This lady should’ve gone for CSH*HOE. I’ve got that on my car, and it’s an awesome conversation starter.

8 thoughts on “Things That Backfire”