Picture a religious ceremony for a Catholic 6th grade class. Every item of food sitting on plates in front of each student represents something (sorry, I don’t remember why we had the ceremony and I can remember only one food item on my plate – horseradish)

Students were not allowed to eat any of the items set before them until our teacher discussed the part of the ceremony that represented each item. 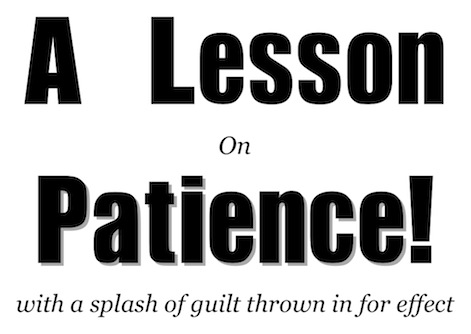 I was in that class and I was hungry, ravished actually. She had decided to perform this little (looking back on it I would say sadistic) ritual to show us something or teach us something. I don’t remember what that was though. I learned nothing other than patience (and guilt – a common lesson taught by my Catholic grammar school)!

When I could stand waiting no longer, my skinny little 11-year-old body HAD to taste the horseradish. I had never tried it and it looked SO GOOD and I was SO HUNGRY. And I would take just a tiny tiny taste.

And so this little Catholic girl disobeyed her teacher’s commands and quickly snuck a finger-filled dollop of horseradish into my mouth. And I learned how to make time stand still.

I am not one to hide my emotions well – I could never be a criminal. I can’t lie – my face shows immediately what my emotions are feeling – so when that horseradish hit my tongue, my eyes exploded out of my head, and I gasped through a mouth open so wide, my jaw dropped to the floor. HOW COULD THIS EVEN BE FOOD? Surely God was punishing me for disobeying my teacher. I was doomed to rot in hell the way my tongue had to be rotting in my mouth with that malevolent venom.

OH! Would this lesson EVER end? How long must I endure this torture? The teacher dragged on and on and on and on. This wasn’t a ceremony – this was Hell and my eyes were on fire, rescued only by the tears that streamed down my face, flooding it with salty relief. I’m sure she noticed that I was completely drenched and huffing like a dog. Sending daggers of swords etched with “SINNER” toward me, she dragged the persecution out even longer, treating me as if I was a detainee in a prison camp for the wickedly insane sinners of the world.

Finally it was time to eat one of the items on the plate. Maybe it would mask the taste of the horseradish. It didn’t. My face was melting from the experience, and I was terrified of the moment I would be asked to put that vile disguising excuse of a food into my mouth.

Rivers of perspiration streamed down my back. My respiration and panting increased. My heart raced. I was going to die – I was sure of it – if I couldn’t get that stuff out of my mouth or something else into it – SOON – something else – anything else – to rid my mouth of the thing that couldn’t possible be edible – GASP – my Catholic teacher must have LIED to me. Horseradish had to have been used to attach wings to planes or maybe it was a very effective torture device we used on our enemies as we watched them squirm and beg in desperation for their own death. If what I was eating was truly food, food must be MY ENEMY.

Now that I think about it, she might have been introducing us little Catholic boys and girls to the Jewish Passover Seder Plate. I would have preferred Romaine lettuce to the horseradish, though, Mrs. Lowe, or was that Mother St. Cecilia! The horror of the moment blocked my mind from remembering which teacher introduced me to TEMPTATION! A Catholic nun teaching Catholic students about Passover? Maybe. Or was Mrs. Lowe really a Jew disguised as a Catholic school teacher. Suspicious. Very suspicious.

Want to read more from this author? Click my Gallery of Posts and THANK YOU for reading.

6 thoughts on “What Happens to Impatient Catholic Girls?”