I like words. You might think that’s obvious since I’m a writer, but words like me too, because they come to me at all hours of the day and night. They visit me in the shower, on the road while I’m driving, in the middle of the night WHILE I’M TRYING TO SLEEP! These little elements of speech come unexpectedly, unwarranted, unbidden, and sometimes unwanted. And many times they are words that have absolutely no connection whatsoever to anything I’m doing or thinking – at all.

When words like that come to me unexpectedly, I have to research them. And what I discovered when I looked up Pityriasis Rosea was that it was an affliction one of my sisters might have had several decades ago – in the 70’s – when doctors were so baffled by her illness, they never made a successful evaluation and they called it erythema multiforme – which is not at all what she had. I know. I researched it.

So I had to assume that when I was sent the words, Pityriasis Rosea, my mission was to inform my sister that what she had endured during the 1970s was probably Pityriasis Rosea.

I remember the phone call I made to my sister announcing my discovery. “GUESS WHAT!” I told her (I was really excited – brilliant doctors couldn’t diagnose her ailment, but I DID). “I awoke today with the words Pityriasis Rosea.”

And my sister said, “OH MY GOD! That happens to me all the time! Every once in a while I awaken and I hear the words, Pityriasis Rosea!”

It didn’t matter to my sister that these words were of no consequence anymore and that this valuable information could have been delivered to me WHEN IT MATTERED.

Whatever. Pityriasis Rosea is not the only word that shouts itself into my ear throughout the day and night. 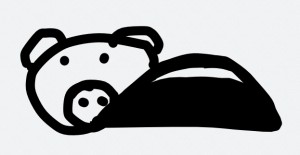 The other night the words, pig iron, came to me. Yes, pig iron. Not iron pig, as in Iron Man – pig iron.

But, hmm, pig iron – I’d never heard of pig iron. Do I have a deficiency in my pig iron content, I wondered? Do I even have a pig iron content? I have iron. Sometimes it’s low. Are iron levels named things like piglet, pig, and sow? I had to look it up, because, maybe I had graduated from piglet iron to pig iron and I needed to applaud myself. Or not. Maybe pig iron is a bad thing.

When the words pig iron came to me, I had to ask myself why pig iron mattered. Just as in the case with Pityriasis Rosea, I had no basis upon which to make an informed decision about what to do with those words. And I couldn’t help but wonder – why did the words, pig iron, come to me, and how did pig iron get its name?

From my research I can tell you that the Chinese were making pig iron all the way back in 1122 BC during the Zhou Dynasty. Pigs in a Zhou. Who’d have thought? Oh, sorry – it’s pronounce joh dynasty.

Anyway, according to thefreedictionary.com, pig iron is crude iron produced in a blast furnace and poured into molds in preparation for making wrought iron, steels, alloys, and more. And according to wikipedia.com, pig iron got its name from the configuration of the molds, making the little ingots appear to be piglets suckling on a sow.

What I found interesting in my research, aside from the fact that I was actually researching pig iron, was that pig iron is melted and a strong current of air is directed over it while it is being stirred or agitated. I was agitated the night those words came to me because I didn’t get enough sleep. Maybe I. AM. PIG. IRON!

Well, if history repeats itself, pig iron probably has a special meaning for somebody I knew back in the 70s. I wonder to whom I am supposed to relate this incredibly important and magical information.