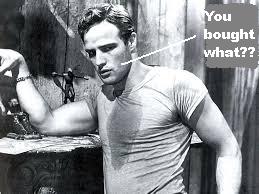 I’m liberal, but I’m no absolutist. I believe in compromise. For example, I think people should be allowed to bring guns into bars and churches, as long as they agree to carry those guns by clenching the end of the barrel between their teeth.

Speaking of compromise, we all know why our Congress is struggling so much. In the House of Representatives a group of members (cough..Tea Party…cough) seems unable to compromise on anything. Since it’s hard to watch anyone struggle (especially the long-term unemployed out here) I’d like to offer a way forward.

The key to moving forward is actually a Tea Party hot-button issue — marriage. We all know that marriage is a ridiculous arrangement. It’s like owning a car with two steering wheels. But it’s also a fantastic way to learn about compromise, because you only have two choices: compromise or disintegrate (just like in The House!). And it works –without marriage my wife would never have started putting down the toilet seat cover.

So here’s what John Boehner should do: make the Tea Party members “marry” each other. Not legally, because that’s still federally illegal, but technically. Make them pair off and live like a married couple. They’d share a two bedroom apartment and have a joint checking account. The “newlyweds” would co-do everything — shopping for food, paying bills, cleaning the apartment, deciding what TV shows to watch, etc.

And then we’d film it, just like a reality show. Imagine watching a Tennessee Williams style standoff like this:

“Stellllllllllla!, I said to pick up a goddamn six-pack of Stella!”

This could totally work. But if not, at least the Tea Partiers would be doing something to earn the money that We The People pay them.

4 thoughts on “A Way Forward”