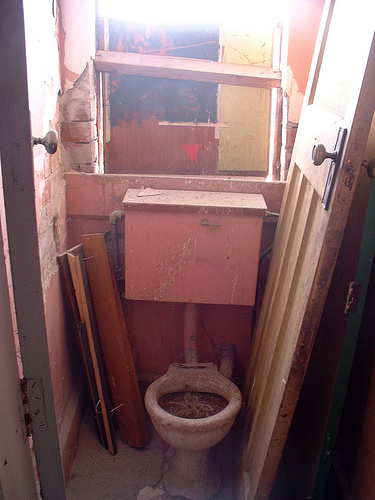 In college I worked in a grimy little bar to keep solvent financially. The windowless, cinderblock establishment was called “Bandidos”. It doesn’t get much cheesier than that.

The guy who managed the bar had the slovenly appearance and gruff mannerisms of John Belushi. If you stripped away the humor, they’d have been clones. I’ve forgotten his real name, so I’ll just call him The Other John. Other John ran a very loose shop, which was perfect for someone like me who took Accounting twice and dropped it both times.

Just how lax was Other John? We had a bartender named Jay who was majoring in Business. Jay seemed to be working at Bandidos as an internship where you learn how NOT to run a business. Jay repeatedly tried to convince Other John that he could increase the number of female customers if Other John would just get the sole ladies toilet to stop plugging up all the time.

Whenever I read about a huge chemical spill or an exploding oil rig, I think of Other John. Some of us don’t belong in businesses, because we just get used to things. If you were unlucky enough to have seen the restrooms at Bandidos, you knew just how dangerous that could become.

One night someone broke into Bandidos. They snipped the padlock off of the gate guarding the front door, and then used a crowbar to pry open the door, destroying it in the process. Once inside, they broke a bunch of chairs and knocked over tables. The crowbar was used to gouge the money holder out of a pinball machine.

But then it got strange. They went for the cash register. But the machine was still plugged in and completely undamaged. Someone used a key to open it up.

Apart from the owner, only one other person had a key — the manager.

Other John’s staged break-in was quickly foiled. The cops found him somewhere in Kentucky. I hope Other John eventually found his true calling (he could have been a great consultant to the Coen Brothers by simply telling true-life stories). Yes, some of us just don’t belong in business.

I quit when they brought in a new manager, a grim little guy who actually wanted to make the place profitable. The fun days were over. I don’t know if they kept the name. They should have put a cut-out of a tennis player on the roof and renamed the dive “Over-Served.”

5 thoughts on “Business Ain’t For Everyone”