Infomercial hawker Kevin Trudeau, whose books Natural Cures ‘They’ Don’t Want You to Know About and  the New York Time Best Seller, The Weight Loss Cure ‘They’ Don’t Want You to Know  About  was sentenced to 10 years in prison for criminal contempt for bilking the television viewing public out of millions of dollars.  Trudeau, who claims to be a changed man, did not convince the judge of his remorse and was carted off to jail immediately after the sentence was handed down. 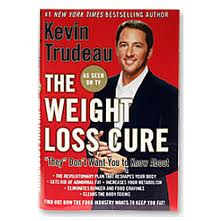 Not to worry, the silver-tongued salesman will make the best out of prison life and rumor has it he already has  Life in the Big House book ideas in the works with proposed titles such as The Federal Prison System ‘I’ Didn’t Want to Know About and  Life Behind Bars: What ‘They’ Don’t Want You to Know about Showering in Jail .  The same 50 million people who bought his books are expected to  buy the prison series as well. Yes, you can’t keep a good con artist down.