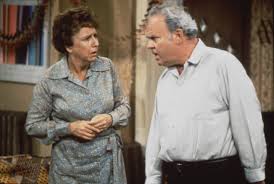 In-law situations can be tough. Misunderstandings arise that can be quite challenging to resolve. For example, when your father-in-law gets mad at you and your wife for cooking meth, it usually doesn’t help to say “Yeah, but we’ve got such good chemistry.”

I spent some time over the holidays with my in-laws and I left our gathering reminded of how lucky I am. No, I’m not trying to “score points” here. It’s true. I got lucky and landed with wise, generous people. My sister summarized it perfectly at my wedding reception. She pulled me aside with an astonished look on her face and, referring to my wife’s family, said “Tom, they’re so normal.”

The insinuation being that I was somehow destined to marry into a freak show.

I’ve got a friend who told me a story recently. He was sitting at dinner with his folks and his parents-in-law. His wife mentioned that she didn’t have enough time to finish all the things she had going on. At which point her mother (my friend’s Mother-In-Law) barked “Well, if your husband got a raise, you wouldn’t have to work so much.”

You can’t learn class like that. You have to be born into it.

But hold on, you head-nodding guys, men get in on the act too. My dad once told me a story about a friend of his. The guy’s daughter was dating a counter-culture fellow. This was sometime in the early 1970’s. The suitor showed up at his doorstep to take his daughter out on a date. He had long hair and was wearing a military jacket that was likely culled from Goodwill. It was meant to be ironic. The father looked at his daughter’s boyfriend and said “I know where we can get you the rest of that outfit.”

Funny stuff, but only if it doesn’t include you. I think 2014 should be the year we all give the in-laws a break. We’re just as screwed up as they are, so it’s a tie in my book.

6 thoughts on “The Year Of The Truce?”