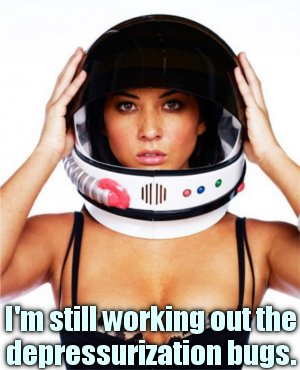 An interstate brouhaha is underway between Houston, Texas and New York City over the final resting place for the space shuttle Enterprise.

The shuttle, which never flew in space, but was the test model for what became the workhorse of our space program, was awarded to New York’s Intrepid Sea, Air and Space Museum, while Houston possibly receive the Explorer, a full-scale mock-up shuttle, and the finger from all living shuttle astronauts. (Which is actually kind of hard to organize, you fucking ingrates.)

Rep. Ted Poe and Pete Olson (R-Texas) and Sen. Kay Bailey Hutchinson are using the proximity of a strip club to contest the shuttle’s proposed location, which is right across the street from the rest of the museum. They believe that this “is no way to treat a precious space artifact.”

But, what if the shuttle inspired those strippers to work their way through college studying science and aerospace? Then the esteemed busybodies from Texas would be interfering in my plans to restore the U.S. space program. And, brother? Space strippers is just the beginning.

First off, why am I qualified to revamp our failing space program? Because I’ve watched every Star Trek movie. I’ve seen what works (II, III, IV, VI, First Contact) and what doesn’t (Voyager). The very fact that NASA named our very first shuttle Enterprise indicates that they started on the right path and then must have been led astray by some James Cameron crap.

I’ve thought long and hard about this, and here’s what I’ve come up with:

Look, I can speak for everyone since is my column, and nobody paid attention to the shuttle program except whenever one blew up, when NASA shuttered it and when a crazy modestly-hot lady astronaut put on a diaper and drove cross-country to kidnap her romantic rival.

Not to ruffle any feathers here, but rigging future spacecraft to explode is out. (Unless, of course, it’s because we’ve “surrendered” the ship to hostile aliens and already snuck aboard their ship while they board ours.)

So, that leaves crazy hot chicks with space diplomas.

We put them up there with very fit astronauts and let the sparks fly. If the space program got half the ratings that the Real Housewives get, then NASA would be able to buy and sell Congress, whose C-SPAN ratings are, frankly, appalling.

You look at those names, and you know what they had in common? Nothing, except solid middle names. And when their name was something stupid like “Percy,” they changed that shit all quick-wise.

The entire roster of the U.S. space program reads like a who’s who of America: Eagles Scouts, straight-A students, war heroes … people you just know were on a first-name-basis with the mayor of their childhood home towns. So, of course nobody likes them.

I’m not saying that we should replace mission commanders and rocket pilots with borderline retards, even though that was the entire plot of Flash Gordon. But, we could throw a couple of regular Joes up there. You know, somebody whose idea of a science experiment is “What happens if I fart in my suit? Oh. That happens.”


I polled my twitter followers earlier today, and it’s a draw between stormtroopers and red shirts. On the one hand, stormtrooper armor is expensive to replace. But on the other hand, red cotton/poly-blend shirts provide no muscle-building movements in space. It’s basically down to enjoying Ensign Ricky’s company until he either can’t see in a firefight or is overpowered by a stiff breeze.

In either case, a rotating-door-staffing problem is not really a problem at all if you’re trying to make space accessible to everyone and eliminate unemployment. 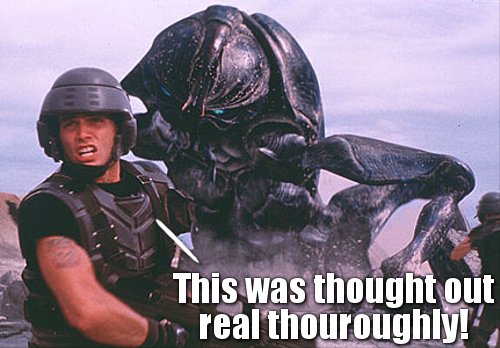 OK, so we’re still technically alone in the universe, at least in the at-the-lunch-table sense. You know what? Fuck those other intelligent species if they’ve decided they’re over war. We don’t need them because we have scientists and bio-engineers, and I’m positive at least one of them is insane.

Just look at Mars. We expected big things out of the red planet, and the only acts of interstellar war they’ve committed are not ducking when we miscalculate probe landings.

It’s time to give her a leg up, and by that, I mean populate it with bio-engineered creatures that we can fight with. And then, finally, the U.S. will finance a space program that makes Star Wars look like Battlestar Galactica.*

*The old one. I’m only halfway through the first season of the new one, so I don’t know if it ends up sucking.