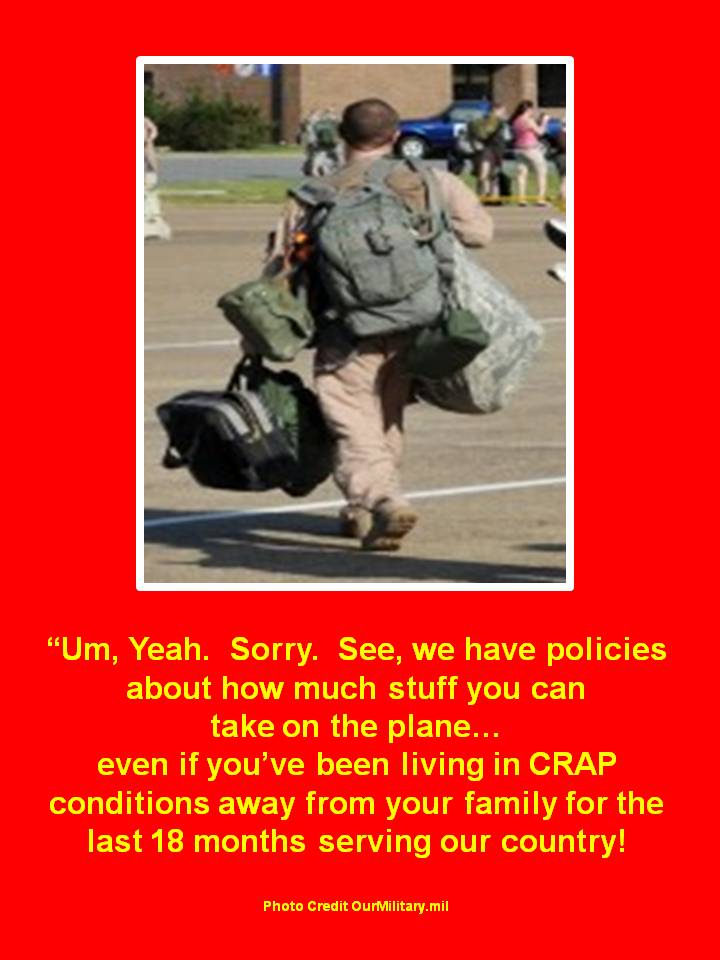 In Catholic School algebra, I always had to solve for the letter n.  So n is now = the person that sent me this story and x = the unnamed military dude that this happened to.  The known variable in this problem = _____ Airlines. Soooooo……

If a plane leaves Chicago at 10pm at night and has a full load of passengers, each with at least 50 pounds of luggage and each of them ate, AT LEAST, 2 CinnaBon rolls, a Chick-Fil-A sandwich, waffle fries and a bottle of water, and only 50% of the passengers actually went to the bathroom prior to boarding therefore leaving the remaining 50% of the passengers with that extra water weight and 12 of the passengers purchased either a hefty romance novel or a Wall Street Journal at the airport store, how much should the ____ Airlines counter staff charge a military person, returning home from duty, for his military equipment bags that are slightly over the acceptable baggage weight limit?

Hmmmm… this answer should be relatively easy if you provide common sense theory. How about ZERO and couple that with a little, “Thank you for your service, welcome home!”

Sure, rules are rules when someone’s trying to bring home 6 dozen pineapples packed in their luggage next to 10 days worth of sweaty underwear.  And you can make the argument that, “if every person brought on just 2 pounds of extra luggage, then we would be WELL OVER our safety weight.”  But here’s my argument back… those people that have to tear through their dirty laundry and remove things at the ticket counter just to meet the official bag safety weight DON’T REALLY WEIGH LESS ON THE PLANE!!!  They stuff one shoe into their purse, another one into their back pocket and stuff their beach towel into the laptop bag.

All I can say is, if I saw that guy, x, at the airport, trying to get home with his military equipment, and his stuff didn’t make weight, I would

3) and if I saw the counter staff making him pay for the extra pounds, I would walk up and pay the bill with my last bit of coins that I planned on using at CinnaBon

In the meantime, how about sending him some free tickets to that he can fly somewhere and relax with his family in a place where he can actually ENJOY the sand that he’s in.  And while you’re in the sending mode, how about sending your counter staff to “common sense school” Ya Jagoffs!!!!