Skip to content
Recent Humor
There’s always someone having a worse day than you…
Donna Cavanagh Shares Scoop on Her New Children’s Book
Your Stuffed Animal Advisor
Inappropriate use of the apostrophe is a sign of the times…
Cartoon: Do You Know Who I Am?

PARAMUS, New Jersey.  Mike Ross, Jr., comes from a long line of entertainers.  His grandfather, Aaron Ross, was a tap dancer, his father Mike Sr. a slick-haired crooner in the 50′s, and his mother Annette a ventriloquist.

“Don’t touch me there, lady–I’ve got termites.”

“I was encouraged to go into show business,” he says as he waits in the wings of The Comedy Corner, a bar that is considered a stepping stone for comics on the way up to the big time in Manhattan, or on their way back down.  “Actually, ‘pushed’ is the better word,” he adds with a professional’s timing.

“But seriously, folks.  You should consider a Roth IRA.”

Mike has flirted with fame in the past, logging a Tonight Show appearance and a week-long engagement opening for Celine Dion in Las Vegas, but he says the applause and the laughter left him strangely unfulfilled.  “It was what my parents wanted,” he says ruefully, “but it wasn’t what I wanted.”

“This stuff is a scream!”

And so Mike studied on the side, sneaking off to night school when he didn’t have a gig, sometimes telling his wife Mona “little white lies about where I was going,” he says with obvious embarrassment.  Then one night last month, after she caught him with a roll of calculator tape in his pocket, he was forced to confess. 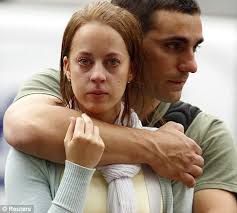 “I want,” he told her tearfully, “to become an accountant.”

After a heated exchange in which she threatened to leave him, Mona gradually came to understand that “‘for better or for worse’ means you’ve got to let your husband follow his dream,” she says with look of hopeful resignation on her face.  “I’ll miss the free cocktail napkins,” she adds.

“A beefalo tax shelter?  You’re cracking me up!”

Mike is blunt about what he saw before him if he stuck with comedy for the rest of his life.  “Sure, maybe I’d get a guest host slot for Leno at some point, or a special on Comedy Central, or maybe even my own telethon for a crippling disease,” he says.  “But in the back of my mind, I’d always know that I could be preparing K-1′s for a wealthy family’s limited partnership, or consoling a young couple who were late with their estimated tax payments.  Making people laugh pales beside that kind of responsibility.”

Mike’s apprenticeship with a six-man accounting firm hasn’t been easy, but he says he’s willing to “pay his dues” in order to earn the coveted designation of C.P.A.  “Some of the senior tax guys heckle me when I’m filing an extension with the IRS, but it’s something you have to put up with when you’re a nobody just starting out,” he says with a smile.  “I don’t mind as long as they don’t throw the federal tax code at me–that thing’s heavy!”

2 thoughts on “One Standup Comic Never Counted Out His Dream”