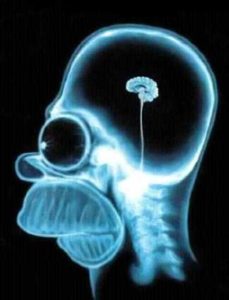 As a kid, I was told my brain was a sponge. “Sure, math is hard, but that sponge of yours will soak it up.”

Except living sponges have no brain whatsoever. Not a neuron in sight.

As I got older, my brain somehow became a noodle. “I guess we weren’t using our noodle today, eh Mr. Hardie?”, remarked my teacher.

Well, no. It’s been boiling in water for 7 minutes.

At work I was told to put my thinking cap on. Is this cap made of wool? I keep scratching my head.

Now my brain is a piece of plastic. The plastic brain can be changed. Doesn’t plastic melt near high heat? I think my plastic is recycled.

Why the cutesy names for the most important organ in the universe? It reminds me of the names my mom gave the vegetables she was trying to get me to swallow.

“Open the tunnel, the broccoli train is coming.” Oops, derailment on my face.

Most of the time I don’t believe my brain even exists. You can’t tell from my behaviour. But, if I had to give it a name, I would go with:

Nerf Ball: When it’s under pressure, it gets very small and stressed out. When it relaxes, it expands greatly. It’s a fun toy and not much else.

Tootsie Pop: The more I lick it (use it), the smaller it gets, until all that’s left is a gross misshapen brown sticky blob.

The brain is not an unbiased observer. It thinks the world of itself. “The human brain is a wonderful organ”, said Robert Frost, or rather, his brain said it. Self-flattery gets the brain everywhere.

I think people like to disassociate “themselves” (we sometimes call it the soul), from their “brain” for two reasons:

– It removes us from responsibility. My brain ate the entire bag of Skittles, not me.

– Humans, as self-important as we are, can’t accept that our entire essence comes down to a lump of flesh.

There’s a test for this. Hit yourself hard on the head over and over again with a hammer. Study the results.

One thought on “Name That Brain”