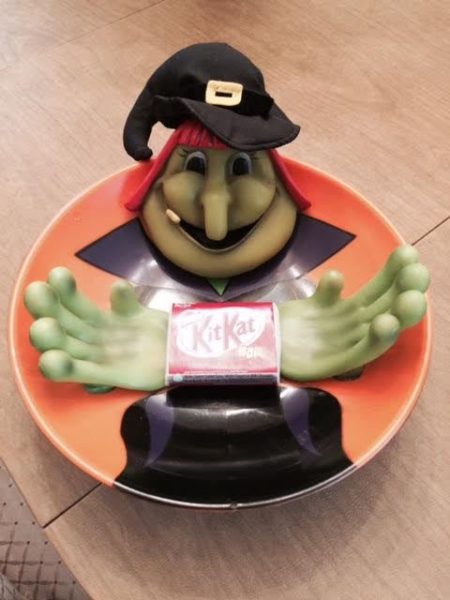 Joyce Eisenberg and Ellen Scolnic write, speak and blog together as The Word Mavens.

As our children get older, we miss some of the fun little kid things we used to do with them: visiting the Please Touch Museum, cruising the aisles at Toys R Us in search of the latest action figure/Barbie doll/Lego kit, and decorating the house for Halloween.

Scratch that last one. Even though our kids are grown, we still plan to hang the glow-in-the-dark skeletons, buy candy, carve pumpkins, buy candy and buy more candy for Halloween.

We can’t help ourselves. Halloween candy appeared in the supermarket the day after Labor Day. We had to hold ourselves back from buying bags of snack-sized Kit Kat bars. Who are we kidding? If we bought these so-tiny-that-eating-one-doesn’t-count candy bars in early September, we would only have three left to give out on Halloween.

An informal survey of our FWCAK (friends with college-age kids) revealed that many of us are still celebrating the pagan ritual of free candy. 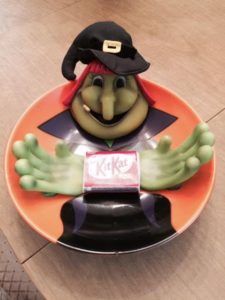 Of course, like any survey, there was a small group of outliers whose celebration was limited to purchasing one bag of fun-size Skittles because “we never get any more than eight kids knocking on the door.” We put these people in the same category as those who only buy candy they don’t like so they won’t be tempted to eat it.

Now with Halloween just two weeks away, we have completed our candy shopping.

It required introspection and strategy.

Excuse us for a minute . . . we have an open bag of Junior Mints that needs our attention.

When we were kids, we loved all the sticky candies (Turkish Taffy, Jujubes and Jujyfruits), but now the thought of pulling out a filling or breaking a tooth from a bad bite frightens us away from buying those. A bite of Turkish Taffy could cost us $675 to re-glue the crown on our left front incisor.

Instead, we stocked up on Junior Mints, dark chocolate Mounds bars and Snickers. We did buy some candy we hate, like Sour Patch Kids, Warheads and Sweet Tarts, because we know we will be able to easily part with it. In fact, we’ll put it at the top of the candy bowl to cover up the good stuff when the kids reach in. And if we get low on the good stuff, we’ll select two treats for each trick-or-treater and drop it in their basket.

Joyce’s daughter, Samantha, was not a fan of that tactic. If she liked the candy offered, she’d eat it on the spot. If she didn’t, she’d return it to the giver – and come home with an empty basket.

In this era when homeroom moms are told to bring in carrots and hummus in place of cupcakes for a birthday celebration, we will not be browbeaten into giving out toothbrushes to the trick-or-treaters. We want to be known as the house that gives out the “good stuff.”

But we are also aware that there are now peanut-free tables in school cafeterias, and that there’s a national campaign to put a teal pumpkin on your doorstep to indicate that you’re giving out non-food treats. We probably won’t paint our pumpkins teal, but we don’t want to leave anyone out. That’s why we also bought spider rings, vampire fangs and glow sticks.

Now that the candy has been purchased, we’re almost ready for our favorite holiday. All that’s left is to put out the decorations and decide whether we’ll pull a black witch hat or a Conehead cap from the attic costume box to put on when we open the door.

So if you are lucky enough to have some kids to take trick-or-treating this year, just head for the houses with the three carved pumpkins, the battery-powered flying bats, and the cars with all the college stickers on them. We’re giving out lots of good candy – if we don’t eat it first.

3 thoughts on “You’re Never Too Old for Halloween Candy”