As I walk down the streets of my neighborhood and look at the Halloween displays that decorate the lawns and porches, I’m struck by how trite and predictable everything appears.  Tombstones angled crookedly out of the ground; cobwebs spread over shrubbery; skeletons, witches and ghosts.  Forget about the hazards to trick or treaters from silent but deadly hybrid cars speeding down darkened streets; it’s a wonder the kids don’t die of boredom.

At our house, by contrast, it’s an entirely different scene.  Instead of the ticky-tacky products of the holiday-industrial complex, the kids will walk through a highly original tableau; scenes of death and violence from rhythm ‘n blues.

The Ghost of Jackie Wilson

Down by the mailbox there’s a grisly effigy of Marvin Gaye, his body riddled with holes left by bullets from his father’s gun.  Walk up the driveway and you’ll see Otis Redding’s crashed plane sticking up out of the ground.  There’s Jackie Wilson, who suffered a massive heart attack while singing his hit “Lonely Teardrops” at a Dick Clark show in Cherry Hill, New Jersey.  His brow is bloodied with ketchup to recreate the damage produced by a head-first fall to the stage.

I’ve recreated these scenes for the kids in order to educate them about the many great black  singers who laid the foundation for the crappy white pap they listen to on their iPods.  I got the inspiration a few years back when a little boy and girl came to the door, she with eyebrow-pencil scratches on her face, he wearing a fright wig.  “You look like James Brown,” I said to the boy.  “And you look like his wife, Tomi Rae Brown!”

“Who’s Tomi Rae Brown?” the girl asked.  It was all I could do to stifle a snort of disgust.  “What are they teaching you kids in school these days?” I said with barely-disguised contempt.  If their dad hadn’t been standing on our driveway with a flashlight, I would have made them come inside and listen to “Star Time,” the definitive 4-CD collection of the Godfather of Soul’s Greatest Hits.  No wonder the kids in Singapore are always cleaning our clocks on standardized tests!

I decided that Halloween Night that I would henceforth decorate our house in a tasteful but edifying fashion to convey to the kids of today the roots of the blues, America’s greatest gift to the world.  Besides the Kitchen Magician and Durward Kirby, I mean.

Durward Kirby:  Obscure for a reason.

I also swore that each year I’d dress up like a famous figure from R&B history and re-enact a scene from its tumultuous past.  Not for me the goofy-looking witch’s hat or the bowls of peeled grapes that pass for eyeballs in our neighborhood.  No–I was out to educate the kids.  Nothing wrong with spoiling a fun holiday with a little pedagogy.

This year, I’d decided that I’d dress up as Al Green, who underwent a life-changing experience in 1974 when a 29-year-old woman named Mary Woodson threw a pan of hot grits on him as he sat in a bathtub.

Green took the incident as a sign, like the burning bush that Moses saw, to do something.  The burning bush told Moses that he was to lead the Israelites out of Egypt; the burning grits told Green that he would be the leader of the Full Gospel Tabernacle church in Memphis, and give up songs of sex for gospel music.  Same story, slightly different scale.

We’ve set up a play stove on the front porch and the grits are cookin’ as our first little goblin makes her way up the path.  It’s Gaura Pandit, ten-year-old daughter of Balreev Pandit, a high-tech entrepreneur who lives down the street.

“Trick or treat!” she exclaims.

“What have we here!” I ask in mock horror.

“You don’t have to be scared–I’m a princess!” she replies.

“Okay, then.  Do you want some candy or do you want to play a game first?”

The girl looks back at her father, who indicates by a nod of his head that she should humor me.

“Okay!  Grab that little pan”–she does as instructed–”now fling it on me.”

The girl is unsure whether to follow my instructions, and looks at her dad again.  “Go ahead, Gaura,” he says.

She rears back and, with a remarkably vigorous motion, thrusts the pan forward, spraying the hot corn and milk mixture over my bare torso.

“Arrgh!” I scream and hit the ground.  Her father comes rushing up the front stairs to help me.

“You told her to do it, I heard you!” he screams, afraid I’m going to sue him.

“Why did you have her do that?” he exclaims in his somewhat-stilted British accent.

“It’s a valuable lesson about the forgotten religious overtones of the season,” I say as I wipe the grits off with a paper towel while the little girl looks on.  “Next week is All Souls Day, when Christians used to pray for the poor people burning in Purgatory.”

“I don’t see the connection,” the highly-educated engineer says with a puzzled look on his face.

“It’s part of the Communion of Saints–one of the weirder doctrines of the Catholic faith, and one that’s usually worth twenty bonus points on an exam,” I say.  I know whereof I speak, having taken home the plastic statue of the Blessed Virgin Mary awarded annually to the highest score in Catechism three years in a row at Sacred Heart Grade School during the 60′s.  Sort of like the Gretzky-era Edmonton Oilers of the 1980s.

“. . . whatever–and it helps somebody get out of a hot spot?” he asks, incredulous. 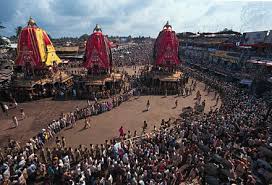 “Yep,” I say.  “Just like the guys who throw themselves under the juggernaut in your country.  Pretty neat, isn’t it.”

I look down at little Gaura, who’s taking care of business filling her bag with Reese’s Peanut Butter Cups.

Her father looks me over, and I sense that he thinks I’m–what’s the word I’m searching for–eccentric.

“You know,” he says after a while, “it’s funny.”  He begins to speak, but his voice trails off. 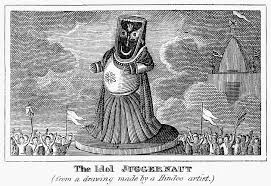 He pauses–perhaps uncomfortable because rhythm ‘n blues is still new to him.

“I came to this country to get away from religious kooks.”

One thought on “A Happy Rhythm ‘n Blues Halloween to You”