EVANSVILLE, Ill.  Beth Dennis, a slim, 44 year-old mother of two, is dressed in surgical scrubs this morning, but she’s not a doctor or a nurse.  “Neil was there for me when I delivered the kids,” she says of her husband, “and I want to be with him all the way today.” 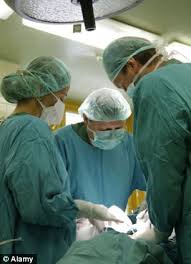 “When you wake up, we’ll both look better, honey!”

Neil is about to undergo breast reduction surgery to correct what Beth joshingly calls his “man boobs,” a drooping condition that affects men’s useless mammary glands as they age.  “I was starting to look like Bib the Michelin Man,” Neil says with a laugh that seems a bit strained.  “I’m doing this as much for Beth as I am for myself,” he adds as he is wheeled into the operating room. 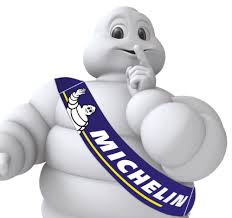 Bib the Michelin Man:  “Don’t tell anyone, but I’m having surgery too!”

While Neil’s parting words might seem defensive, in his case they are literally true since the excess tissue that is removed from his breasts will be added to Beth’s as the couple recycles unwanted body mass from him to her.  “Having kids and getting older takes a lot out of you,” she says, her eyes misting over with tears.  “I’m just so lucky to have a husband who’s willing to suffer so that I can have the big knockers he craves.” 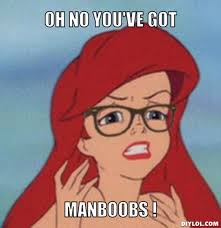 According to entertainment lawyer Norman Schwein, Neil and Beth’s saga “is like something out of an O. Henry story.”  He is referring to “The Gift of the Magi,” in which a husband pawns his watch to buy combs for his wife’s hair, while the wife cuts her hair off to buy herself an early version of the Black and Decker DustBuster.

Anatomical gifts were illegal in much of America until the American Law Institute promulgated the Uniform Anatomical Gift Act in 1978, and twenty-seven states quickly adopted the model statute in the hope of reducing holiday traffic jams.

Veriform appendix:  “I absolutely love it!”

“Anatomical gifts can be great stocking stuffers if you find yourself short on presents for someone you love,” says professional shopper Nan Kane O’Riley.  “Who wouldn’t love to find an appendix under the Christmas tree, as long as it’s packed in a styrofoam cooler with plenty of dry ice?”

For Beth Dennis, this Christmas will be one she’ll never forget.  “Neil’s gift will be one that I’ll wear proudly wherever I go,” she says, “unlike some of the stupid sweaters he’s given me in the past.”