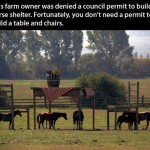 Well, it’s spring, and Madam and I are on the road again. Last year’s touring began in Wisconsin with a Memorial Day band concert followed by Lake City Eagle Days. All those John Philip Sousa marches gave me blisters and a sudden urge to start playing the trombone.

Madam insists our road trips offer sites and sounds guaranteed to transform me into the “bomb proof” equine partner she’s looking for. Incidentally, her zest for bomb proofing trips spiked after our Baker Park caper when she made an unplanned exit from yours truly and landed in a plum thicket.

Anyhoo, today’s Memorial Day practice run began with a drive through the countryside to the tiny town of El Paso, Wisconsin. Here we took in the World Champion Bacon Festival. The parade, hosted by El Paso’s Chamber of Commerce, featured a portly women decked out in a sequined bacon bikini. As for the parade entries, I voted for the Toro lawnmower drill team, but first place went to a hand-decorated manure spreader carrying city council members.

After sampling a breakfast BLT, Madam climbed into her Ram pickup, and zipped off to the village of Elmwood. By the by, Elmwood earned her title, UFO capital of the world, a few years back. It seemed that local law enforcement spotted an unidentified flying object behaving suspiciously. Rumor says that a county sheriff spied the strange conveyance whirling above the local football field. He radioed for backup and described something like a garden hose dangling from the bottom of the saucer. The sheriff also claimed he received a terrific shock while viewing the extraterrestrial. He asserted the shock knocked him unconscious. When he woke up, he witnessed the UFO trying to suck up electricity from a nearby power plant. Apparently, the saucer required an electrical bump. In any case, the story made quite a splash in the National Enquirer, and Elmwood has been celebrating ever since.

Once Madam and I reached our quota of UFO testimonials, we moseyed on to Downsville Days where we met a throng of deer hunters dispensing beer and venison sausage from the front steps of the Dew Drop Inn. One look at all that camo apparel, convinced Madam to cruise on past and make our way to Eleva. That’s when we met the Eleva Broiler Fest parade marching up County Road 35. Madam pulled over for a better look, though smoke from the VFW chicken barbecue made it hard to see the floats. I did notice Eleva’s Mayor Swede Tollefson shooting cans of beer from something that looked like a bazooka. Eleva has no firearm restrictions.

So it was quite a day, considering official touring season has not even begun. I’m looking forward to marching in the Scandia Rutabaga Festival in July, but for now, I suggested to Madam that we might want to stay home for Memorial Day and listen to A Prairie Home Companion.

6 thoughts on “On the Road Again”