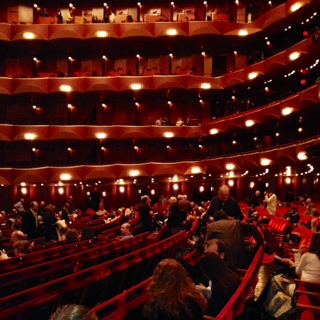 This is going to be long. There is just too much here to laugh at:

I used to have a wonderful vocal coach who, when she heard me say something that she thought was dumb (which was half the time), would yell, “Stupid f***-head soprano!”

Sopranos are expected to be ditzy. Supposedly, the vibrations that buzz through a soprano’s head whenever she sings a high note result in the rearrangement of brain cells. My coach assumed that I, a big-voiced soprano, was brain-dead. Many people who know me say she was right.

Most people don’t know or care, but there are different kinds of sopranos. These range from coloratura sopranos* with their light voices and stratospheric high notes to dramatic sopranos, who can’t sing as high but make up for it with loud voices that can peel the paint off a wall two blocks away. The loudest of the dramatic sopranos are the Wagnerian sopranos. These are the spear-carrying ladies in the long dresses and Viking helmets, bellowing out war cries or setting everyone on fire. In between, there are lyric sopranos and spinto sopranos, including me, the author of this lesson. We spintos have a lot of fun because we are basically lyric sopranos with punch. We get to make the audience cry with heart-melting scenes and take the paint off a wall two blocks away at the same time. It doesn’t get any better than that.

By the way, your Aunt Judy who sings solos with the church choir is a lyric soprano, but not in the same league. Opera singers have to be able to project to the last row of a theater, over an orchestra, without a microphone. Put a real operatic lyric soprano with Aunt Judy, and Aunt Judy will last about two notes before being swallowed up like a mouse in a cage with a hungry snake.**

Sopranos get to sing almost all of the leading female roles in opera. Our characters are love-struck, long-suffering, self-sacrificing, abused, dying, psychotic because of abusive relatives and all kinds of other things that get loads of sympathy from everyone except a lot of the other characters onstage.

This brings us to the subject of mezzo-sopranos. Mezzos have voices that are lower pitched than sopranos. The term mezzo-soprano means “half-soprano” in Italian. Why they are called that, I don’t know. It’s kind of insulting. It must be an Italian thing. I wouldn’t describe most mezzo voices as “half” by any means, especially when one of them is singing near me. Mezzos can break eardrums as well as any other opera singers.

They also come in categories, from coloratura to dramatic. Some of them get tired of being in the supporting cast and drift into soprano repertoire occasionally, which makes things interesting, if confusing.

Unlike sopranos, mezzos are expected to be more or less level-headed. In truth, they are just as ditzy and outlandish as sopranos, but I never heard anyone say, “Stupid, f***-headed mezzo” to anyone. It just isn’t done. The stress of having to appear relatively normal for an opera singer is hard on the poor mezzo, especially when she sees sopranos and tenors getting away with murder. Occasionally, they break down and exhibit the same traits, but they soon learn to put a lid on it, so as not to buck tradition.

Mezzos usually end up playing villains, old women, witches or sluts. Sometimes they play men. This is a throwback to the castrati of the 17th Century. Castrati were the rock stars of their day, except they sang opera instead. They were men whose testicles had been removed when they were boys to preserve their high singing voices. For some reason, people back then thought the sound of a grown man singing soprano was really cool. Fortunately for the male sex and their privates, this fashion eventually faded, and parents stopped turning their sons into eunuchs in hope that they would become rich and famous. Female singers ended up taking up the slack. As a result, mezzos have to wear pants onstage a lot.

No, it isn’t logical. End of discussion.

It might seem that mezzos get shafted, but, in a way, they get the better deal. They don’t have as many roles to choose from, and they usually have to play second banana, but their roles are juicy and often much more interesting than those that sopranos end up with. It’s the case of the villain or the character role vs. the moony, virtuous heroine. Take, for example, the opera Aïda, by Giuseppe Verdi:

Profession: Daughter of the King of Ethiopia (but nobody knows this). A slave in the court of the Pharaoh of Egypt, having been captured in war.

Nice. Sweet. Homesick. In love with Radames, the leader of the Egyptian army (which isn’t easy, because he keeps going to war against her country). I mean STUPID in love. Self-sacrificing and patriotic. Also suicidal.

Profession: Daughter of the Pharaoh of Egypt. In line to be Queen.

Spoiled. Smart. Ambitious. In love with Radames and will do anything to snare him. Devious. Gets what she wants or else. Goes into huge emotional meltdown when her actions come back to bite her in the ass in a big way.

You tell me. What part would you rather play?

**Church sopranos and other non-operatic singers who choose to sing with an opera singer don’t know the mess they are stepping into. It is the duty of every opera singer to try to out sing everyone else who is singing at the same time, because it’s fun. We expect other opera singers to react in kind, and they almost never disappoint us. If you don’t believe me, go onto YouTube and find a video of one of the Three Tenors concerts, where all three of them are singing together. If that isn’t competitive singing, nothing is!

11 thoughts on “Opera for People Who Don’t Like It”