Skip to content
Recent Humor
This one goes out to the haters who said I couldn’t do it…
All the Charisma of a Shark
Fun Things to Do at the DMV
Me and Barney the Purple Dinosaur
Ripping the Headlines Today, 10/16/21 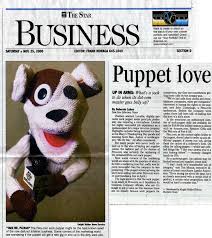 I came by my puppet, whom I call “Spot,” through the turbulence of creative destruction that free-market types welcome; Spot is the former star of Pets.com commercials, and when the dot-com boom ended, my wife picked him up as a present for me for a song.

Ever since, we’ve been working on a medley of Chet Baker tunes to which he lip-synchs, casting an eerie spell as he channels Baker’s ethereal boppish voice.

Chet Baker: If you close your eyes, you can’t tell them apart.

It was after a late-night rehearsal–actually, I guess one doesn’t really rehearse lip synching–that Spot floated a crazy, off-the-wall idea.

“You know, lip-synching is fine,” he said, “but I feel it’s limiting my career.”

He turned from his perch on the end of my finger and looked me straight in the eye. “I want to sing–for real,” he said.

I considered for a moment what that would entail. “If you want to sing,” I said as the unseasoned music business pro that I am, “you’re going to have to work a lot harder.”

“No you’re going to have to work a lot harder,” he shot back at me.

“Because I’m just a puppet. You need to work on your ventriloquism.”

He was right about that. I’ve been fooling around with “throwing my voice” ever since Tommy Racunas used to take home a prize, year after year, in the Sacred Heart Grade School Spring Talent Show with his dummy “Charlie” back in the 60s. For weeks afterwards, he’d have Carolyn Stretz, Trudy Espinosa and Candace Mitzel eating out of the palm of his hand. Then he’d run out of sunflower seeds, and things would return to normal.

“You’re right,” I said. “If we’re going to take our show on the road, we need to get better, and start at the bottom.”

“Did I ever tell you about the time I almost got to play with Matt ‘Guitar’ Murphy of ‘Blues Brothers’ fame in Hampton Beach when my roommate’s bass player showed up a half-hour . . .”

“Only about a million times.”

Matt “Guitar” Murphy: I came thisclose to playing with him!

“Right. I remember now.” I was humbled. No man is a hero to his sock puppet. “There’s just one problem with your idea,” I said after I’d recovered my self-esteem.

You could have knocked Spot over with a feather–if he hadn’t been attached to my arm. “You’re kidding,” he said. “The ‘Live Free or Die’ state?”

He turned away, then angrily slammed his little paw against the wall.

“What are you crying about–it’s my paw,” he snorted.

“You’re an inanimate object,” I replied. “I’m the one who can feel pain.”

“No,” I replied. “And if they did, what difference would it make?”

He was fired up now. “Because if they did, they might have learned a thing or two from Areopagitica.“

“A Speech for the Liberty of Unlicenc’d Printing?”

“On the nosey. For my money, it’s still one of the greatest defenses of free speech.”

“You don’t have any money,” I reminded him. “What would people learn if they read it?” I asked, a bit skeptical.

He went to the bookshelf, pulled down his little thumbnail-sized edition of The Complete Poetry and Selected Prose of John Milton, and flipped to page 720.

“They would know that licensing–a requirement of prior approval–’is but weaknes and cowardise in the wars of Truth,’” he declaimed, warming to his topic. “We arrive at truth by permitting a diversity of ideas.”

“Well, yeah. Milton did have a blind spot about that.”

We sat there in silence, thinking about the never-ending struggle to keep speech and puppet shows free.

“So are we gonna do something about it?” he asked after a moment.

“What can one man and one puppet do?” I asked.

He gave me a look of cold, pitiless contempt. “I can’t believe you,” he said. “You sit there all day with your finger up my butt, while our precious freedoms are frittered away.”

“I didn’t say I wouldn’t help–I just have to know what I’m in for.”

He got right up in my face. “We’re going to New Hampshire–tonight!”

“I’ll drive,” he snapped. “You can sleep ’til we get there. In the morning, we’ll hit the streets, and put on the baddest unlicensed puppet show New Hampshire’s ever seen!”

“All right!” He gave me a high five, or actually a high one, since he doesn’t have reticulated digits on his paws.

“Just promise me one thing,” I said, slowing him down for a moment.

”You’ll give me plenty of warning if you have to pee.”