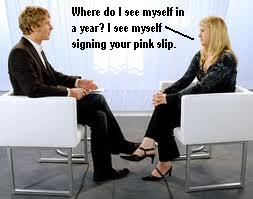 Job interviews are just like meeting your girlfriend’s parents for the first time – there are so many ways to blow it. One time I was interviewing for a job in Oregon. The interviewer led me into a room where two other employees sat a rectangular table. There were two seats left, so I took the one on the side (and not at the head of the table). I figured it was just like dinner – Dad always sits at the head. Makes sense, right? But after I dropped into the seat, my interviewer said “Uh, that’s where I sit.” So I replied “Oh, I figured I’d lead the interview today.”

Somehow I got that job. A few months later I discovered that it was a horrible fit. I’ll spare you the details, but I ended up drinking those nasty body-builder shakes to counter rapid, unwanted weight-loss.

I remembered that after reading about a guy who was interviewing for a job in London. He rode the subway to the interview and, while exiting the train, he bumped into another passenger. So he told the guy to “Go f**k himself.” Then he did whatever for a few hours and walked into the interview, which was at an investment firm. The interviewer turned out to be the person he’d had the nasty exchange with back on the train. But he didn’t recognize him. So the interviewer asked him a few subway-related questions until the penny dropped.

What are the chances of that happening in a city of 8.3 million people? We can laugh at the guy, but he might’ve just saved everyone (including himself) from a real bad experience.