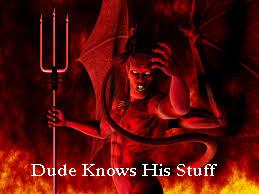 The other day I stumbled across a video of a 2012 speech given by the current Chief Justice of the Alabama Supreme Court. Yeah, I know, I need to get a life. That or find some different websites. Anyways, in the clip the justice claims that Satan is convincing people to accept gay marriage.

By all means, people, take Satan’s advice on this one.

But I’m less interested in the marriage issue, which has been settled in the court of public opinion and is awaiting final action by the US Supreme Court. I’m more interested in how Satan actually does this. I imagine it goes something like this:

Your cell phone rings. You look down at the caller-ID and see 666. And you say “Jesus, this guy just won’t stop calling. Last week he tried to get me to vote for Jeb Bush.”

So you pick up the phone, determined to stop these calls once and for all.

“Hello there,” Satan says in a booming, ominous voice, drawing the words out for maximum effect. “I want you to accept gay marriage.”

So you exhale and say “Look, pal, this makes no sense. Follow me for a moment here. You’re behind things where peoples’ actions hurt other people, right? Wars, sex-crimes, reality TV cat-fights, things like that. Now, if I accept gay marriage I’m helping other people, not hurting them. So, given your role, your logic here makes zero sense.”

You hear a quick intake of breath.

5 thoughts on “Taking Advice From Satan”