A. J. Ayer, founder of the Logical Positivist school of philosophy, had so many love affairs “you quickly lose count.”

amazon.com.uk review of A.J. Ayer: A Life, by Ben Rogers He’s done it again; I sit by the phone, my hair up in curlers, reading Wittgenstein’s Tractatus Logico-Philosophus just so I can drop it oh-so-casually on the coffee table if . . . that horrible word! . . . if he happens to come by.  I want to make him jealous of me, the way I suffer each time he gives a cute coed a B+ in Introduction to Empiricism! 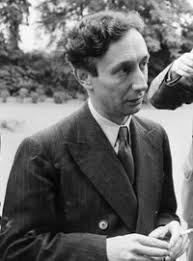 It’s no use pretending–I am simply mad for the love of him.  But what girl wouldn’t be if she’d told him she loved him, and heard his standard-issue reply: “Statements that cannot be verified by experience must be recognized as non-sense.”  It is then–when he’s driven me crazy with his cold logic that I give myself to him.  Afterwards, “in the ruins of our pleasure” as the great poet of the 70′s Jackson Browne will someday say, I turn to him and ask “Did I verify by experience my statement that I love you?” I thought I had him the last time we made mad, passionate love.  He had insisted that we dress up as the two opposing sides of Wittgenstein’s duck-rabbit head.  While I do not enjoy the kinky stuff, I’d do anything to please that man!  That particular “philosophical parlor trick” seems to incense him above all of his rival’s many accomplishments.  “Someday when I’m living off my Oxford pension, re-using tea bags three times to get by, Wittgenstein will be raking in the royalties from duck-rabbit t-shirts,” he would grouse.

“Ayer?  Please.  I’ve got more notches on my bedposts than him.”

So if it’s a twisted turn-on that he needs, I will abase myself and give it to him.  But I feel so . . . so . . . phenomenological afterwards.

He gets to hob-nob with top fashion designers like Fernando Sanchez and wacko super-model Naomi Campbell, and I’m supposed to just . . . accept it.  Every time I summon up the courage to say “Why won’t you take me to the glamorous parties where you tell off Mike Tyson?”  And he gives me that look and says–as if I’m some kind of dummy–”(3x)(Gx)(Fx)(Rxy).”  “I know what that means,” I scream at him, “and I will not get a boob job unless you’re paying for it!” “Just like Occam said–the most succinct solution is the best!”

Who am I kidding?  There’s no use fighting it.  You try it, when he storms into your bedroom, looks at all the great works you had to buy for Philosophy 101 that you keep around to impress your dates and says “A large part of what is traditionally called ‘philosophy’–including metaphysics, theology and aesthetics–is meaningless!”

That’s when I break down.  I . . . I can’t resist.  When he tells me I’m nothing more than a bundle of sense impressions to him, and that all talk of “love” is non-sense, I can only say–

Available in Kindle format on amazon.com as part of the collection “Let’s Get Philosophical!”

3 thoughts on “Why Do I Love Him So? He’s a Logical Positivist!”