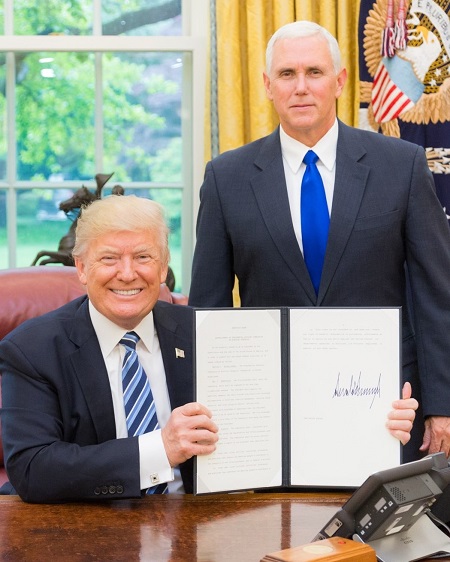 Liberal snowflakes, fake media, the Hollywood elite and just people in general have spent the past year bashing our president saying things like he’s not qualified, he’s a bully, he’s a sexual predator, he’s an idiot, he’s full of shit…stuff like that. All true, but nobody’s perfect—I mean, look at his hair. But these naysayers also point out that the Donald hasn’t accomplished anything since the day he was sworn in before the biggest crowd ever to witness an inauguration (estimates were as high as infinity!). Well that’s where they’re wrong because 2017 provided the greatest list of accomplishments by any president since Vladimir Putin’s first year in the Kremlin.

Just take a look at the following:

After the disastrous eight-year reign of that Negro Muslim terrorist from Kenya, it is a relief to be able to say “Merry Christmas” again instead of “Happy Holidays,” which is Muslim terrorist language for “Fuck Christ! Praise Allah!” And it’s all due to the hard work of one Donald Trump who ignored Obama’s directive, bravely stood in front of the cameras and uttered those wonderful words we hadn’t heard in years: Merry Christmas. Thank you Donald for putting the Christ back in “Holy Christ, Christian conservatives are stupid!”

Our relationship with Russia have never been as good as it is now. Previous administrations had the narrow-minded view that allowing other countries—especially sworn enemies—to help decide our elections was a bad idea.

Long ignored by previous administrations, such minorities as white supremacists, neo-Nazis and obese white guys named Jim Bob carrying confederate flags finally have a voice in Donald Trump. So light up those tiki torches boys, run over counter-protestors with your cars and march on! Free at last, free at last, god almighty white folk, you’s free at last!

Building the wall…to be continued…

Construction of the big, beautiful border wall designed to keep rapists and bad hombres (aka Mexicans) out of America has been delayed due to Mexico’s bitchy refusal to pay for it. But the concept of building a big, beautiful wall designed to keep out rapists and bad hombres is still alive, so we’ll call that an accomplishment.

Who doesn’t want tax cuts? And the biggest chunk of cuts go to corporations so that they can use the extra bucks to make life better for the rest of us bottom-feeders by creating new jobs. This is called “trickle-down economics,” which has been tried by previous administrations with absolutely no success. But those presidents didn’t have the business chops of a man who has filed for bankruptcy six times.

Coal mining is back! Next on the agenda: Switchboard operators.

Donald Trump promised us he would load up his administration with “the best people” and he’s done exactly that. In fact he has so many “best people” that a number of them have been relieved of their duties to make room for even more “best people.” How he finds them is a mystery, but the man knows “the best people” when he sees them. Take Anthony Scaramucci for instance. He was so fucking good at directing communications, he was able to do it in just ten days!

It’s taken a few months for Americans to fully understand the President’s remarkable vocabulary of the best words, but what a learning experience it has been for those of us limited to vocabularies of the mediocre words. But after nearly a year of listening to the man weave his magic, I have come up with a statement using all the best words I have learned from our president that expresses my feelings perfectly:

Believe me, Donald Trump’s tremendous victory over that disaster, crooked Hillary, was something terrific, wasn’t it? I mean he won bigly, am I right? Fake news wanted you to believe he grabbed women’s pussies and conspired with Russia to win the election…sad, isn’t it? Sad. But none of that could keep him from winning a YUGE victory. So, to all of you fake news losers out there like CNN and the failing New York Times, I say covfefe.

2 thoughts on “2017 Year in Review: The Accomplishments of President Donald J. Trump”