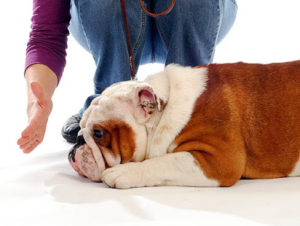 For goodness sake, if you want to train your dog properly, stop speaking infantish to him.

Your dog is not a human infant. The reason we talk googly to infants is that we are training them early on to speak an entire language. Your dog will only ever recognize a few words and, surprisingly, will never actually speak them. To form the basic “ma”, “ba”, “fa”, “la” sounds, the dog needs lips at least as big as Mick Jagger’s, and you have to replace his tongue, which serves the same purpose as a flattened piece of Double Bubble on the road. The tongue must contact the palate in a firm way to produce these sounds. No dog has this.

What I’m saying is your dog is stupid, albeit in a very cute way. I think on the I.Q. scale, a dog comes in way below a pig, so that bacon you’re eating is quite intelligent, but your dog is a dolt. Julie Andrews can visit your house and sing Do-Re-Mi to your dog all day and at the end he will lick his balls and her vocal chords.

So, make the words your dog learns important words, like “sit”, “stay”, and “if I find my Italian loafers in your mouth, I will wrap you in foil and put you in the microwave.”

Yes, that means cut the googly talk from your vocab. “Who’s a good boyyyy”, “Who wants to play with the ball”, “Who pees like a big boy” (all in a grating baby voice). None of that. Notice I didn’t put question marks after those “questions”. Your dog doesn’t know what a question is, and doesn’t care.

The whole concept of asking your dog a question is absurd. Who the hell is in charge here? Asking him a question implies that he gets to decide shit, and that he has weighed the alternatives. Cut it out.

YOU make the decisions, despite what your spouse tells you.

Your dog does get tone of voice. So, when you say, “Get in the goddamn car or I’ll break your legs”, sure, it’s a lot of unnecessary words. You probably just have to point. But it’s fun to say, right? Go ahead and say it. Practice on your spouse. Just don’t phrase it as a question. You’re embarrassing yourself in front of other dogs.

When you speak infantish to your dog, your dog thinks, “What a patsy. This jerk’s gonna give me all the prime rib I want”, only not in those words exactly.

There is no such thing as empowering your dog. Your dog doesn’t give a shit who Oprah is, doesn’t take advice from Dr. Phil, and doesn’t care what his constitutional rights are. You are training the dufus, a la Pavlov. Stop messing around with infantish.