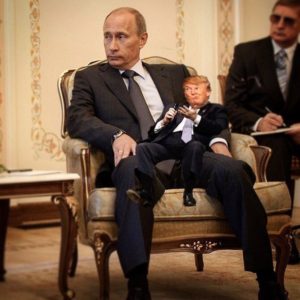 Still undetected by the CIA or the KGB our seemingly undetectable drones have this time crashed the phone call our feckless leader made to Uncle Putin the other day. We could analyze it and pre-masticate it before feeding it to you like FOX Un-News does, but we will just let you digest it on your own:

Putin: Trumpy! How things are in Capitalism Capital?

Putin: Yes, yes! That insulting, nosy investigation by underlings would never happen here! Mueller would be shipped off to Siberian basket weaving commune faster than you can say “Gulag!”. Or, better, come down with mysterious ‘radioactive illness’.

Trump: Yeah, you guys really know how to work things the right way over there in Russia, I have to say that! None of this silly, wimpy “we have to run it through the Senate and House first” legislation bull roar. Straight forward, that is what I like about the Russky way of doing things. None of this ‘democracy’ crap like we have here. Just bada-bing, bada-boom, and it is taken care of. Sometimes I feel like I am running the wrong country.

Putin: Ah, you would make good Russian President, Donald! You already have fine ruthlessness about you. And you already know things that count most- money, power hoarding, control, surrounding yourself with toadies and not giving damn about anyone else but you.

Trump: Yes, I would Putee! I seem to be great at everything I do.

Putin: Indeed! Now that you have this heresy behind you we can go back to doing business again.

Trump: Yeah, sure. What have you got?

Putin: I have Russian bridges I want sell you just like they used to sell in your home city of New York.

Trump: Oh, OK. Send me some photos and I’ll look them over.

Trump: Hmm….that could be interesting……

Putin: And I put you in touch with friend of mine Nigerian Prince needs help getting money out of country.

Trump: Sure Putee. Just have your secretary fax me all this and I’ll look it over.

Putin: Yes, we make lots of money together. Preferably dollars!

Trump: No problem, old pal! Man, I sure am glad I got this whole Russian Hoax thing over with. I almost lost it when I first learned of it. I thought I would lose the Presidency!

Putin: Oh, that would have been terrible! Especially after all my hard work……..I mean YOUR hard work!

Trump: Darned tootin’! I put a lot into it- campaigning, spending money, shaking hands, insulting other candidates, coming up with bullpoop the losers would believe, putting Hillary in her place. If ever there was a woman who should be barefoot and pregnant it would be her!

Putin: Well, we….I mean YOU worked really hard to crush…..I mean, DEFEAT her. I, for one, am so glad you won. It would have been great difficulty to control……I mean, DEAL WITH her instead of you.

Trump: Well, you got your wish. I became President and I did it all by myself.

There is silence on the line, then there is a sound like barely suppressed, animated snickering.

Trump: Putee, are you OK?

Putin: (still sounds like uncontrolled, muted snickering) Yes… (he is trying to catch his breath)…yes…you did it all by yourself …..(more snickering)…don’t worry…..me am OK….(Still sounds odd)……just my asthma acting up. Normally I am super-fit Russian god-like man, but bad air in Moscow sometimes gets me…. Am OK now!

Trump: Oh, that’s good! Can’t have my best buddy AND the King of Russia croak on me now, can we?

If you do I might have to come over there and run both countries….

Trump: Putee, are you sure you are OK? You don’t sound good.

Putin: (Still trying to control himself) …Yes…am OK… Fool body guard laugh at something. I have him executed after phone call. Then all will be good.

Trump: Man! You could just have the guy toasted just like that! What an incredible country you have!

Putin: Well, you said you could shoot a man on 5th Avenue and get away with it!

Trump: Yeah, I said that. Hmmmm….I wonder if I could get Mueller to meet me on 5th Avenue? Hmmm……

They both laugh uproariously.

Putin: Yes, that is what I am finding out. Sometimes I miss the old, stress-free Communist times.

Only difficulty is what to do with dissident bodies.

Putin: (serious) That not joke.

Trump: Oh……well…..it certainly is a problem I haven’t had with my Presidency. Of course it might be in the near future….

Putin: I can give you tips. It not so hard if you have big trunk on limousine.

Trump- Gotcha. Will keep that in mind. Well, really gotta go. Catch you next time!

Trump: Oh, goodbye! Don’t forget to have the body guard shot! (After hanging up) What a great guy he is!

Putin: (After hanging up) What a moron! But am I glad I have him under my thumb!