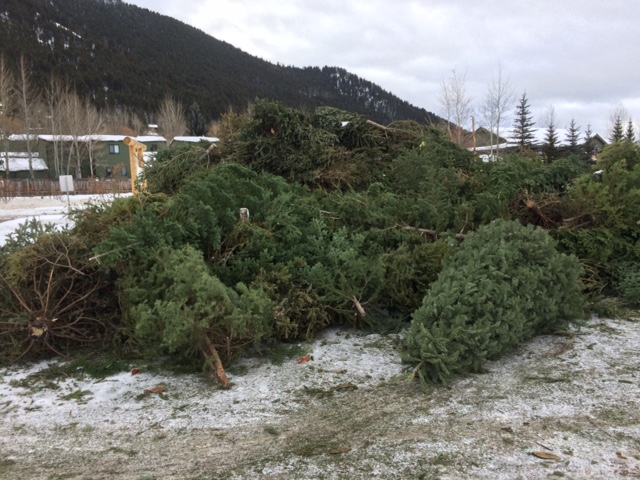 A mass grave of viciously murdered evergreen trees has been uncovered in the popular ski resort town of Jackson Hole, Wyoming near the Idaho border. The local police were alarmed by this discovery which has horrified residents and visitors alike. The trees were found dumped near the fairgrounds not far from downtown.

“It was a brazen act, probably perpetrated by a ruthless cartel from Mexico.” stated Matthew Foghorn, a town spokesman. “ I can’t imagine anybody local doing this.”

“This is definitely a massive, coordinated attack.” inferred Sheriff’s Deputy Hans Knucklecracker. “All the bodies of the trees showed marks of having been horrifyingly cut down in there prime and their bodies dumped here to put a panic into the townspeople. We have never seen anything like it. This is the sort of thing you would expect in LA or the East Coast. Similar saw marks have been found on all the trees and some show signs of torture, select limbs having been cut off or shortened and their tops often lopped off. It is a grisly scene. There is tree sap everywhere. Even some of our toughest, long term officers have wretched or fainted at the scene.”

To make matters even more macabre, many of the trees showed signs of having been used for some strange ritual. Thin ribbons of glittery silver strands were found dangling from the limbs of many of the corpses and some had small, strange hooks with shattered remnants of highly colorful, fragile objects hanging on them. Police theorists suspect that the trees were used for some sort of bizarre pagan ritual making the crime even more macabre.

“Things like this just don’t happen in our town. There is normally a friendly, fun environment here. We don’t expect a massacre here in this peaceful part of the state!” stated local resident Marcia Homebody, a local beautician.

“I think the elks are behind it. If no them then it has to be the Shriner’s or the Legionnaire’s!” confirmed James Bullfeces, an expert on conspiracy theories

The corpses of the trees will be buried in a mass grave at the town dump and a stone erected to honor their memory. A memorial service for them will be held at Joe’s Landscaping on the north end of town at 10 AM on Saturday in their honor. Attendees are being asked to bring fertilizer in lieu of gifts for the event.

Anyone with tips as to the perpetrator of this heinous crime please notify the Sheriff’s or the police department. The public’s help in this matter might help prevent another such atrocity next year at this time.