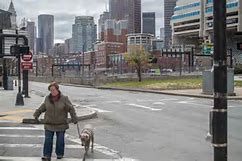 BOSTON.  This city may no longer be the “Hub of the Universe” as Oliver Wendell Holmes once claimed, but it remains the tenth largest metropolitan area in the country, a fact you wouldn’t believe if you saw its central business district today.  “It’s like a ghost town in the old westerns down here,” says Sgt. Jim Hampy as he sips on a cup of coffee while on “paid detail” looking into a hole dug by utility workers.  “There’s tumbleweeds up on Washington Street as big as a Honda Civic.”

Office buildings are virtually empty, and the self-serve bins of candy typically found in their first floor news stands have been banned as a health precaution due to the coronavirus, with an unintended consequence.  “A lot of the guys who could hide their addiction behind closed doors in the past are wandering the streets like zombies,” says drug counselor Mike Abruzzioni.  “The ones with the yogurt-covered raisin ‘jones’ are the worst.” 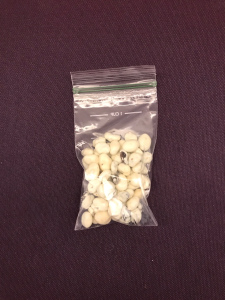 Efforts to help “yogies”–as other addicts refer to those “hooked” on the sweet, supposedly-healthy confection–were slow to gain traction until a solution from another form of deadly narcotic was adopted; safe, clean “shooting galleries,” strategically located throughout the city, where addicts could ingest the highly addictive snack without embarrassment or fear of arrest.  “I wouldn’t say it’s been a win, win,” says Ancil Bessechlos, a fellow at the Lodge Institute, a public policy “think tank.”  “We can’t have good ideas succeeding around here, it might get out of hand.” 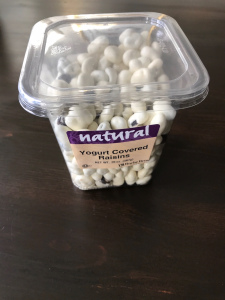 Boston is a city with lively residential neighborhoods in its core, and the move to get “sweets out of the suites and into the streets” has met with resistance of the sort referred to by the acronym NIMBY, for “Not in My Back Yard.”  “My father paid a million bucks for a 650-square foot condo and I wake up to find a guy sleeping off a sugar high on my front steps,” says Amanda Craig, a junior at a college downtown who lives on the northern, “back” side of Beacon Hill.  “If I’d known I’d have to look at that crap every day I woulda gone to a cow college with a football team.” 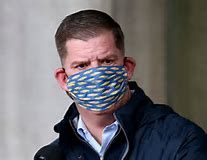 Mayor Walsh:  “You’re all going to have to leave–as soon as you pay your real estate taxes.”

But addicts say they’re just making do until they can return to their offices and feed off stashes left behind in desk drawers when the mayor urged businesses to stop making money and leave town.  “Many yogurt-covered raisin addicts get their habits under control and go on to lead productive lives,” says Abruzionni.  “If you call reading boring documents all day ‘productive.’”