ACTON, Mass.  It’s Folk Music Night at The Den of Antiquity, a coffeehouse in  the basement of an Episcopal Church here that serves as a meeting place for  those whose tastes are offended by the thumping bass beats and loudspeakers to  be found in local bars.  “Folk music aficionados are more genuine than lounge lizards,” says Rev. Norbert Stowe, who is manager of the club by virtue  of his status as pastor.  “Instead of a meat-market atmosphere, we promise a more  tofu-like experience.” Part of the passion for sincerity that is embedded in the club’s mission  statement is a commitment to original music that faithfully depicts the lives of  everyday people in the area.  “I think we’d be doing our patrons a disservice if  all they heard when they came here was ‘Greensleeves’ and ‘The Whistling Gypsy  Rover,’” Stowe says.  “We carefully vet our acts to make sure the mirror they  hold up to life doesn’t present a mere reflection of the past.” 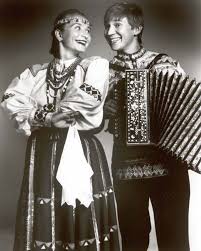 As a result, featured acts take a page from the happenings around them in the  area, much as the wandering minstrels of days gone-by would work true stories of  love affairs and killings into their lays.  “People have forgotten that folk  music comes from real folk,” says Ted Dwynar, tonight’s opening act, as he tunes  his guitar.  “You’ve got to use the material of your own life if you want to  keep it fresh.” “That lousy bitch was such a phony/I stopped  paying alimony.”

Dwynar’s opening number is a rousing anthem on a political issue that has no reverberations beyond the town’s borders, an upcoming vote on a bond issue that would finally, after 300 years of doing without, finance a sewer system for  residents who currently rely on septic tanks or cesspools.  “It’s gonna  raise our taxes quite a bit, and only for to haul away our . . . poop,” he  says with a smile in a nod to the church’s no-profanity policy.  The audience is  evenly divided between those in favor and those opposed to the measure, but they put aside their differences with a bi-partisan round of applause when the song  comes to an end.

Next Dwynar turns to a song of a love gone wrong, specifically, his first  marriage.  “Violet was into shells and sea anemones, now I deal with her lawyer ’cause she’s the enemy,” he sings, and a few grey-haired widows in  the crowd try to catch his eye to signal their availability.

Next up is Basil Sheed, a banjo-picker with a self-produced EP to his credit,  who is known for his detailed slice-of-life songs that, in his words, “peel back  the shrink wrap from the little hermetically-sealed packages our daily lives have become.”  “O, the Daisy Chain goes round and round, sparking gossip  round the town,” he begins, then settles in for a series of verses that  detail the various infidelities he’s aware of.  “Jim is sleeping with  Jerry’s wife, keeps her moanin’ through the night,” he sings.  “Sandy  likes the way Bob spanks, when he’s done she gives him thanks.“ “Good song.  I didn’t realize you were boinking my  wife until the last verse.”

Stowe grows concerned that Sheed is coming dangerously close to a violation  of the group’s policy of not giving needless offense to any living animal,  vegetable or mineral, and rises from his spot at the card table near the entrance in order to act swiftly if he goes over the line.

“When a preacher comes to visit your spouse, you better make sure you’re  in the house,” he sings, but before he can get the next line out of his  mouth Stowe cuts him off with a curt “Thank you very much Basil,” and grabs the  microphone.  “There’s congo bars and mulled cider over in the Snack  Shack.”

One thought on “As Folk Music Returns to Roots, Some Try to Bury Them”