Skip to content
Recent Humor
Uncle Sam Says
Ivanka Trump Agrees to Testify Before Congressional Committee in Exchange for Supreme Court Annulling Her Marriage to Jared Kushner
Cartoon: “Do You, Kimberly, Promise To Not Bear Witness Against…”
Boba Fett may have changed but he doesn’t underestimate the power of the dark cat…
Laugh Today–or Else

Many couples have cute stories to tell about how they met, which they are happy to recount at nauseating length.  For others, however, the circumstances of a first romantic encounter were regrettable, causing embarrassment whenever the inevitable question–”How did you two meet?”–comes up in social situations.  Our readers constantly fill our mailbox with letters seeking advice on this sensitive subject–here are this month’s missives:

“I can’t believe you like the Dewey Decimal System too!”

I met my boyfriend “Dave” while I was working a private police detail at a University of Minnesota-Mankato hockey game against their arch-rival, Minnesota State, which I just happen to be a graduate of (B.A., Criminal Justice, 1997).  My boyfriend was a student at UM-Mankato at the time.  Anyway, Mankato scored on a breakaway with two seconds left and the place went nuts as Minnesota State has basically “owned” Mankato since the ’50′s. 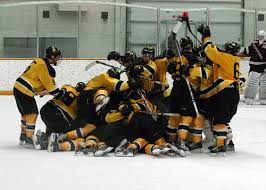 Kids spilled out of the rink, throwing cups with crushed ice in them, and it was my sworn duty to restore order.  I will admit that the pain of my alma mater’s loss may have given my crowd control a harder “edge” than usual, but I was just doing my job when I collared “Dave” with my nightstick, threw him to the ground and began to grind his face into the frozen asphalt of the Clinton J. Warnke Memorial Parking Lot.

I noticed after a few moments that “Dave” seemed to be enjoying what some people might consider “police brutality.”  “Hurts good,” he said–”More.”  “You like that, huh?” I said, and we sorta struck up a conversation.  I have to say, “Dave” was easier to talk to than the guys I meet at church ham ‘n bean suppers, and I’m not getting any younger, so I conveniently forgot to read “Dave” his Miranda Warning and the night court judge dismissed the charges.

Things have worked out fine for Dave and me–our shared interest in close-combat techniques has made for a fulfilling, if somewhat noisy, sex life.  My problem is–what do I say to my fellow officers at police conventions and professional development seminars? 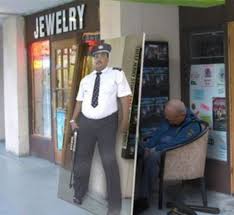 Undercover mall cop:  “You have the right to remain asleep . . .”

I see no reason for you to be embarrassed.  If it weren’t for lawbreakers, police men and women would have nothing to do, and you would all be assigned to athletic shoe stores in malls, where your chances of meeting someone nice would plummet dramatically.  Be upfront about your past–if they ask, tell your colleagues that the story of how you two met is a riot! 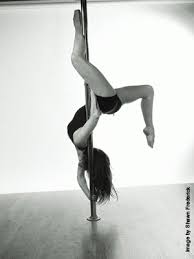 I am a 28 year-old male who was not lucky in romance until I met Chastity, who is the girl I want to marry.  I’d like to take her home to meet my folks, but there is one problem.  I met Chastity at the Golden Zucchini Lounge, where she works as a pole dancer, but I told my parents she is a toll taker at Exit 10 on the Massachusetts Turnpike.  I don’t know why I felt I had to make something up–Chastity is a very “accomplished” dancer and could use the skills she has learned to become a professional ballerina, or help people reach behind large kitchen appliances to get stuff they drop.

As you may have heard, they have now taken down the tolls on the MassPike, so I can no longer live a lie.  I want to be honest with my parents, but I am also sick of the dating “scene.”  Please help me out here.

There is no reason for you to be ashamed of Chastity.  Pole-dancing is a learned profession every bit as reputable as toll-taking, with the additional benefit of providing healthful stretching and aerobic exercise during work hours.  Tell your folks that you could have settled for someone who sits on her can all day, but you decided to aim higher for someone whose derriere is in the air!

My wife and I have a little secret that we do not like to share with our neighbors in a very upscale neighborhood.   She and I are first cousins, and met at a family reunion when we were young.  We do not look alike, and our children seem fine except that Norland, my son, didn’t learn how to ride a bike until he was eighteen.  Anyway, I am tempted whenever someone asks how we met to just say “None of your bee’s wax,” but my wife says this will keep her out of the nicer bridge club in town.  Can you come up with a compromise suggestion that will maintain our privacy while allowing us to advance socially?

The stigma of “kissin’ counsins” has faded over time as scientific research has proven intermarriage to be no more harmful to a person’s well-being than smoking or car crashes.  Many of America’s most noteworthy citizens are the products of marriage between first cousins, including Claude Furman, a million-dollar-plus life insurance salemen for Mutual Assurance of Keokuk, and Marjene Wilbur, the “Poet Laureate of America’s House Pets.”

Tell your snooty friends that you were introduced by family members, and if they want more information they can go to the Bureau of Vital Statistics and pay 50 cents a page for photocopies like everybody else.