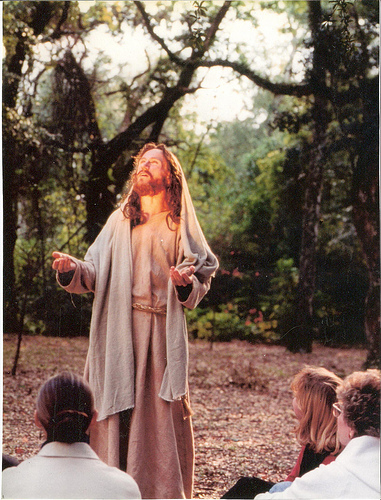 I had to do a phone interview with a Jesus performer – I don’t know if that is the right term, but he is an actor who only plays Jesus. I feel  I have to state that out loud because when I first began the interview, I wasn’t quite sure if actor Jesus and his “disciples” realized he wasn’t the real thing.

The interview got off to a rough start as  I had to wait a few minutes as actor Jesus was tardy, so I chatted with his PR people who I noticed kept referring to the actor as Jesus and twice I found myself asking in a tone that psychiatrists use on delusional patients, “You know he’s not the real guy–right?”

The PR “apostles” kept assuring me they got that, but honestly, I think they were placating me as they apologized over and over for Jesus’ lateness.  I tried to tell them that the apologies weren’t necessary; I understand that a Savior’s day has to be hectic.

“He’s so busy,” they told me.  As each minute passed, someone else jumped in with the busy excuse.  And each time they did,  my mind would add  a one-line Jesus zinger which I am sure would not have gone over big at all if I uttered these comments aloud.  Here are a few examples that flew into my brain and luckily not out of my mouth:

Them: Jesus is so busy

Me: Busy doing what? Walking on water?

Them: Jesus had a full schedule today

Me:  Casting out demons…er, I mean the GOP?

Them: Jesus has been running all day

Me: He’s Jesus. Can’t he just appear or fly or something?

See, any of those responses would have cut that interview short and to be honest, after listening to the PR people, I really wanted to talk to the guy. So, Jesus finally put on a headset to join in the conversation and once again, I stopped myself from asking: Why do you need a headset?  Can’t you just read my mind?

As we settled in for our chat, I thought I would start off with a few simple questions.

“How did you get the Jesus gig?”

To which he responded,

My first reaction was that Jesus had a good sense of humor, but he didn’t laugh. No one laughed except me. So, either I somehow missed the news of the second coming and Jesus was on the phone with me, or they were all freaking crazy. I guessed the crazy option was the most probable one.

I did not back down.  “What father?  The carpenter, the heavenly father, your actor father—which one?”  And again I felt it was my human duty to ask aloud, “You know you are not the real guy–right?”

Confession time: Had this been a face-to-face interview I would have run for the hills, but I was a few hundred miles away and pretty confident fake Jesus wasn’t going to materialize in my office to seek revenge.

The interview did not get any less strange as it went on, but it was a lot of fun. Hell ( and I mean that as an exclamation phrase not as the place), by the end of the conversation,  I believed he was the real deal and I found myself asking if he could get the water out of my ear that had been driving me crazy since swimming last week.

While Jesus couldn’t pull the water out of my ear via telephone, he did recommend some ear drops he uses when he swims. When the interview was over, Jesus told me he enjoyed himself and to keep in touch.  Usually, when a celebrity says that to me, I know they don’t mean it, but I really got the feeling that Jesus did.

Jesus hung up and I stayed on the line to give some details to his PR people.  I said to them,

“Okay, he is an amazing interview!”

And I must have gushed a bit because one of his PR people said,

“You do know he is not the real guy–right?”

17 thoughts on “Interview with Jesus”