For the past few months, I’ve laughed as much as possible each day. No matter what else goes on regarding money, relationships, or any other challenges I run into, I’ve been blessed with a great sense of humor and three comedians that happen to live in my house. Sometimes the fun comes from outside forces, but even then, I know I can go home and share it with people who appreciate what really matters– the crazy joy of the belly laugh.

When you’re looking for something, it shows up everywhere:

1. I woke early on Sunday morning, surprised that the school year had already taken effect and that sleeping in past 7:30am would be an impossibility, even on the weekend. I stumbled down the hall, looking for other creatures of habit, awake and restless with boredom. I found no signs of life, but I did find a sign: 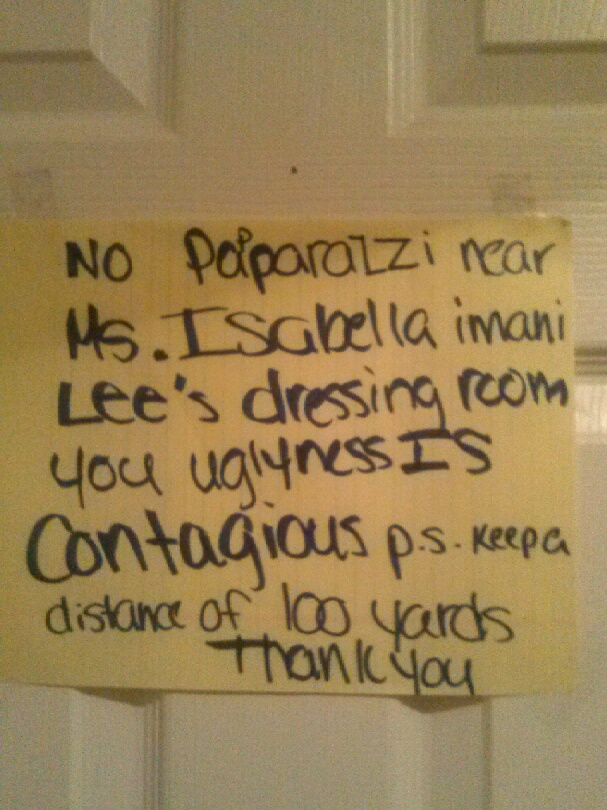 2.We went to the supermarket with a $20 budget for dinner. Max and Bella decided to share frozen chicken tenders, my oldest daughter, Ali, chose a California Pizza Kitchen cheese pie, and I got a bunch of vegetables to saute for myself. After scarfing down the pizza at 4:30pm, Ali stood close to my shoulder, watching me chop the veggies and chattering away at me. When I was ready to eat, she started asking, “Can I take some vegetables?”

I said, “No, you decided on frozen pizza and you watched me prepare everything without offering to help at all.”

Fifteen minutes later, she asked again and got the same response. Ali paused, and then said, “Mom, you’re my least favorite because you won’t give me vegetables.” My fourteen year old son was walking by the kitchen and added, “Said no kid ever.”

3. In our house there is the athlete (youngest daughter), the artist (middle son), and the drama queen (oldest daughter). As you can imagine, the oldest is one of those people who is completely over the top. It could be the fact that she’s a Scorpio, but I’m betting on it being because she’s a teenager who is really into drama. The theater kind. On stage.

She and my son are pretty close. They chose lockers at school near each other and hit the deli up in the morning for breakfast. Word on the street is that my freshman even has a date for the senior prom, one of her friends. I’m pretty happy with the fact that Ali is not embarrassed to hang out with her younger sibling. 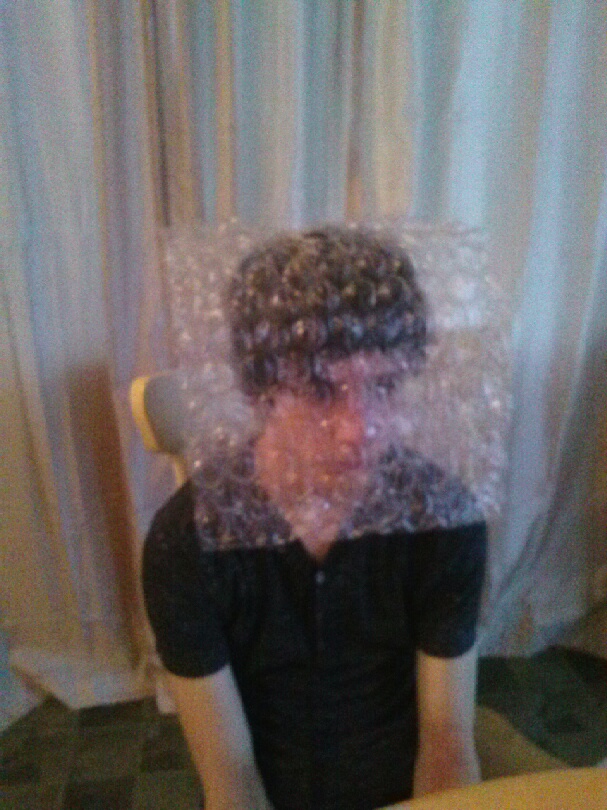 As I type, they are cooking dinner for themselves and rapping Lip Gloss by ‘Lil Mama. Suddenly, Ali suddenly gets serious.

Ali: “Max are you going to join the Musical?”

Ali: (Holding him by his shirt collar, gritting her teeth, and growling): “If you don’t join the Musical, I will wait until we’re older, sneak into your house, and kill your firstborn.”

4. Bella’s superpower is getting other people to do for her what she should do for herself. I’ve caught myself getting sucked in from time to time, but as part of my 2013 New Year’s Resolutions, I vowed to build up an immunity to her powers of persuasion. That and I think that my contract for cleaning ear wax was up in 2007.

After scarfing down an apple and twenty pizza rolls, my very active eighth grader was still hungry. She asked me to warm up some leftover egg noodles for her, but I stayed strong…and I was busy. She pouted and asked me again. This time I was annoyed that she was throwing her baby face around. “No Belle. And stop asking me. Do it yourself.”

She never got up from the couch (where no doubt Sam and Cat were holding her hostage and keeping her from warming up her own food) but made eye contact with Ali, who was across from her on the other couch, watching the exchange.

With a straight face Bella said, “Ya know, the help is here is sooo bad.”

5. This morning, Max and I were getting ready together. He just got a haircut which means that he’s obsessed with the mirror, probably because some anonymous peeps posted that he’s “hot” on some new social kid zone thing called ASK FM, after he uploaded some selfies. None of the photos had anything to do with bubble wrap, so I’m thinking that his admirers are not people who can really appreciate him for all that he truly is.

We were sharing a mirror that is large enough to accommodate me putting on make up, but not him spraying hairspray that had nowhere to go but in my mouth. After I stopped choking and was able to breathe again, I tried to reason with him.

Me: “Max, that’s a lot of hairspray you’re using there. You don’t have long hair like the girls. You shouldn’t have to use that much.”

Me: “I’m convinced that you are contributing to the destruction of the ozone layer and climate change. The next time a Hurricane Sandy-type storm hits, and thousands of people are without homes and power again, I’m pointing a finger…”

9 thoughts on “5 Things That Made Me LOL”