WELLESLEY FALLS, Massachusetts. Janet Disalvo is, by her own admission, an unreformed hippie.

The mother of three lets the grass in her front yard grow wild, creating a sharp contrast with the well-manicured lawns of the homes on either side of hers. “I don’t really fit in,” she says, “but we moved here for the schools,” whose students regularly score in the top one percent of districts in the state. She grows vegetables out back, and there are solar panels on her roof.

“Basically, what you get with me is the full counter-culture package, plunked down in white-bread suburbia,” she says with a self-deprecating laugh. 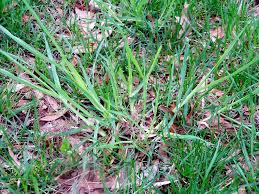 The garden out back.

As Halloween approaches, Janet spends hours creating a “haunted house” atmosphere for trick-or-treaters, stringing spider webs across her front porch and placing illuminated ghosts and goblins in her yard. “I do everything I can to create a fun atmosphere,” she says with a tone of disappointment, “and yet every year vandals seem to single us out.”

Janet leads this reporter into her kitchen, where she is finishing homemade treats for the youngsters who will begin to show up at her front doorstep in a few minutes. “I was really one of the pioneers of the ‘wholesome treat’ movement,” a claim that is borne out by the cookie sheets that cover every square inch of counter space.

“We have zucchini-carob cookies, and soy-carrot congo bars over there,” she says as she places the nutritious snacks in colorful baskets lined with festive black and orange napkins. “I grew everything in my garden. Ooo! I almost forgot the seaweed-apple fritters,” she says with alarm as she scoots around the counter and turns off her oven.

Within minutes the first trick-or-treaters arrive. It’s the seven-year old Armstrong twins from down the street; Justin is dressed in camouflage while Allison has on a nurse’s outfit. “Hi, Janet,” their mother, Karen, says after the children sing out their “trick-or-treats.”

“Well, well–what do we have here? Let’s see,” she says as she looks Justin over. “You must be some sort of paramilitary death squad commando forcing American imperialism down the throats of an impoverished third-world country. And you,” she says as she examines his sister, “have been sexually stereotyped into a low-wage, subservient position within America’s inequitable and inefficient for-profit healthcare industry.” After she catches her breath, Janet hands each of the children a lentil and molasses cookie with a cheerful “Here you go-there’s your treat!”

Justin offers a perfunctory “Thank you,” but Allison holds the cookie up for inspection. “It’s a dog dooty!” she says as she tries to drop it into her mother’s Kate Spade handbag.

“Allison,” her mother Karen says sternly with a tone of reproach. “What do you say?”

“Thank you,” the little girl says without enthusiasm as she turns to move on to the next house.

“She’s tired,” Karen says, apologizing for her daughter. “They all get so whooped up about Halloween and then they just crash!”

“Right,” Karen says and, as her voice trails off, turns to leave. “Well, see you up at the school!”

No sooner have the Armstrongs left than another group of children approaches. They are a little older than the twins, and without adult accompaniment.

“Trick or treat!” the kids yell with enthusiasm when they see the various baskets of goodies.

“Oh, my goodness–you really threw a scare into me!” Janet says with mock fright. “Take your pick–whatever strikes your fancy!”

The kids mill about and look through the natural snacks, holding them up to their noses and, once they smell them, putting them back.

“Uh, no,” says a girl dressed as a witch. “I have trick-or-treat for UNICEF, though.” The girl holds up an orange box. 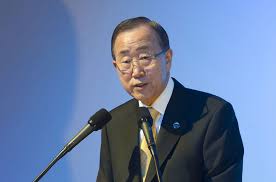 Trick or treat for Ban Ki-moon!

“I’ve got some money in my pocket.” Janet digs down deep and pulls out a dollar. “Here,” she says as she slips the bill through the slot. “You send this to Ban Ki-moon and tell him to take his U.N. troops to the Middle East and kick the Americans way the hell out of there.”

“I think it’s just for children.”

“Just don’t let them use it to extend American hegemony over the Middle East in the service of their Zionist puppet-masters,” Janet says.

“We just hand the money in to our teacher.”

A little too old.

The children leave and Janet hears the sounds of teenage boys yelling in the street. Three boys chase each other into her yard, where they quiet down a bit as they approach her door.

“Trick or treat,” they say, a bit sheepishly.

“Aren’t you boys a little old to be trick-or-treating?” she asks them.

The boys suppress laughs, and one of them says “I’m twelve.”

“I guess that’s all right. Still, you should be helping out in the community. You could be crossing guards at busy intersections, or make treats for underprivileged children, or hold a fund-raiser to pay for a bi-lingual teacher . . .”

The boy who spoke previously interrupts her. “Uh–since I’m only twelve, I have to be in bed pretty soon if you don’t mind.”

“All right–just making a few suggestions. Help yourself to the treats-I’ve got plenty left for some reason.”

The boys poke at the alleged goodies for a moment, before one of them speaks up.

“Goodness no–and take all the fun out of a traditional, old-style Halloween with sugary junk that will make you hyperactive and rot your teeth?”

“Not around here it’s not. Your moms and dads will be thankful that I was thoughtful enough to care about their children’s health. If you don’t like the snacks, I’ve got some punch inside.”

“What’s it made out of?” a boy dressed as Darth Vader asks through his mask.

“Uh, sure, sounds good,” the boy says as his friends appear to stifle coughs.

“Sounds like you two could use something for your throats with all that yelling you were doing!”

“Sure,” one of the others says.

“I’ll be right back,” Janet says. She goes into the house, pours three cups of punch and puts them on a tray. As she emerges from the house she is splattered with eggs that the boys throw before running off, laughing as they go.

“It’s like this every year,” Janet exclaims as she wipes herself off. “The harder I try, the worse they treat me!”

Available in Kindle format on amazon.com as part of the collection “Blurbs From the Burbs.”