DOS FLEDAN, Freedonia. An American C-17 Globemaster cargo plane touched down on a bombed-out landing strip here today with the first shipment of leftover Halloween candy from the U.S., bringing sustenance to a nation that has had to get by with little more than hope lately.

“Our prayers are answered,” Flen Gleboltz shouted over the noise of the jet engines. “I hope there are many Reese’s Peanut Butter Cups in the belly of the great songbird of mercy!”

“The kids didn’t take any of the Bit-o-Honeys.”

In a makeshift hangar, a group of Freedonian women begins to ululate in a rhythmic, high-pitched chant; “Alla-lalla-kitta-katta-breaka-barra!” they sing over and over. What does it mean, this reporter asks Gleboltz. “It is a traditional song of supplication,” he says. “It means ‘Give me a break, break me off a bite of that KitKat Bar!’”

Human rights groups have criticized Western indifference to Freedonia’s plight, but Marcy Wilbur, a housewife in Shaker Heights, Ohio, says she isn’t callous, just confused. “You’ve got the Greater Curds, the Lesser Curds, the fundamentalists–how the heck am I supposed to tell them apart?” she says as she seals a package of leftover sweets. “I can’t have this candy in the house, though. I’ll gain ten pounds, and I’ve got the charity ball season coming up.” 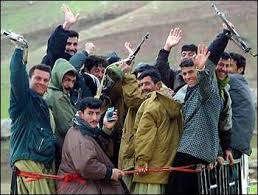 Marcy has adopted an ecumenical approach, sending slightly-stale candy to everyone involved in the conflict, just as she made no distinction when she handed out treats last night for Halloween. “I know some of those kids put shaving cream on my Lexus, but my policy is, kids will be kids. Everybody gets a treat!”

Charity ball season is upon us!

Freedonia has been beset by armed conflict since the end of World War I, when the nation was created out of Moldavia, an abandoned Six Flags amusement park and leftover mashed potatoes from a Thanksgiving dinner that ended in a family dispute. The principal aggressors are the Greater Curdish or “Large Curds,” a militia organization whom the Freedonian government has assisted in their attacks on the Lesser Curdish or “Small Curds.”

“This is more than a fight over cottage cheese,” said UN Secretary General Ban Ki-moon. “We call upon the nations of the developed world to ship their leftover Milky Ways and Three Musketeers bars to Freedonia, which I understand is located somewhere in either Europe or Asia.” The former South Korean Minister of Foreign Affairs and Trade was seen filling his pockets with Snickers candy bars as he left the news conference. “I used to love these things as a kid,” he admitted with a guilty smile.

Ki-moon: “I could really go for a Snickers right now.”

The US declared the conflict genocidal in 2010, at which point the UN commissioned a study. Two years later the UN released a white paper stating that the situation was “a crisis,” but the report’s final draft referred not to the loss of life in Freedonia but to the lack of parking near the U.N.’s headquarters in New York.

When asked if the UN would eventually join the rest of the world in treating the conflict as genocidal, Ban Ki-moon demurred, saying it was not his place to tell U.N. delegates how to vote. “I can’t get them to agree on the menu for the Miss Universe contest,” a UN-sponsored beauty pageant, he said with frustration. “Finally I have to say–’Chicken, fish, prime rib–those are your only choices!’”

Available in Kindle format on amazon.com as part of the collection “Hail, Freedonia!”