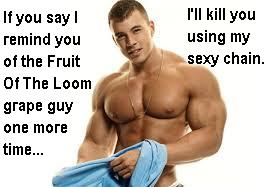 I am totally on my gym-game today. I’m not kidding, I really am. This is primarily due to getting some decent sleep last night. The cat I’m watching didn’t wake me until 5 am, which I attribute to this: 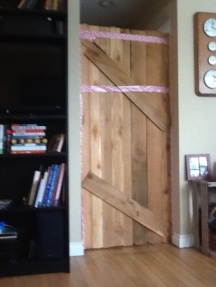 You won’t find this at PetCo, whose animal fences are designed to foil arthritic poodles. I had to make this bad boy. I always knew my middle-school Shop class would come in handy one day. And the Hello Kitty duct tape was a nice ironic touch in my opinion.

So I’m killing it on this treadmill. My speed is 4.4 mph and I can literally feel the morning’s bacon fest oozing through my pores. Sure, I’ve got a strange new pain in my left knee, but that’s okay. The last time I strained a muscle it was in my butt and resulted from leaning over to clip a toenail. At least this injury is due to exercise.

But one thing is still wrong here, and it’s not the shower soap wreaking havoc on my hair – it’s the TVs. They only offer two options and both blow. CNN is showing a clip of Bush/Cheney/Rumsfeld/Rice defending the CIA’s forcing people to stay awake for a week at a time so it can gain erroneous “intelligence”. I don’t know where Wolfowitz is, probably out buying a step-ladder so he can use his bathroom mirror. Watching this stuff is like finding out that your parents were serial-killers — not motivating at all.

So I’m going with Option #2, The Price Is Right. The prize doors have just slid back, revealing a new car from GM. But the winner isn’t jumping around like most contestants do. He’s just standing there, staring. Maybe he’s envisioning the ignition switch failing and the car crashing into a tree before exploding. He looks over at the host and says something. I don’t know what that is because there’s no volume or closed captioning. I’ll bet he’s saying “Can I have that model gesturing at the car instead?”

So here’s the big question — why don’t gyms show enjoyable things like pet videos or beautiful shots of National Parks? Even clips from the Olympics would do. But game shows and interviews with torture-apologists aren’t motivating, even if working out is torture.

4 thoughts on “The Big Question For Gyms”