KANKAKEE, Illinois.  Like many tribute band members, Sherylynn Lester knows it is unlikely she will ever live the rock star lifestyle. “My chances are slim and none, and Slim just left town,” she says with a giggle.  “We’re out on the road night after night because we love to perform and we love the music.” 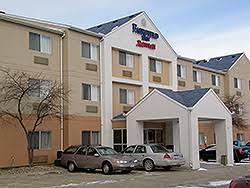 She and her brother Tom bill themselves as “The Carpentbaggers,” a two-piece band that performs the music of The Carpenters, the top-selling pop music act of the 70’s.  “Most tribute bands do heavy metal,” says Tom, who doubles as the group’s manager.  “We thought that easy-listening fans weren’t getting a fair shake.”

And so the siblings travel together in a van containing Sherylynn’s drums, Tom’s keyboards, a public address system and their own lighting, playing small town venues.  Sherylynn sings the songs made famous by Karen Carpenter before her untimely death in 1983 due to excessive dieting. 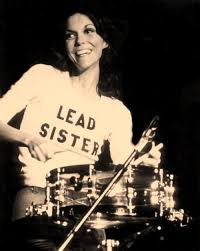 But Tom, the older of the two, runs a tight ship, right down to the reproduction of Karen’s flyaway bangs, which Sherylynn achieves only by sleeping in oversized curlers, her hair frozen in place by White Rain hairspray.  “It’s just like when we were kids,” she says with repressed resentment in her voice.   “Anytime we were left alone, mom would put him in charge.”

But it isn’t the rigors of the road that rub her the wrong way, she insists, it’s the places Tom books them into.  “What am I supposed to do,” he says with a shrug, as he coils amplifier cords around his arm.  “We aren’t getting a lot of calls from the Rock ‘n Roll Hall of Fame.”

So tonight the duo is setting up at the Ramada Inn here, where the main attraction for most of the crowd is the all-you-can-eat buffet with a dessert cart featuring chocolate and butterscotch pudding, jello parfait, peach cobbler and blueberry pie.  “The people who come out to see us, they want the total Carpenters experience,” says Tom, who insists on absolute verisimilitude.  “I don’t think anybody expects a carbon copy,” Sherylynn says as she tries to wrest her wrist free from her older brother’s grip.  He makes her drop a roll back onto a bus tray, then they prepare to take the stage, their faces aglow with nearly-identical fake smiles. 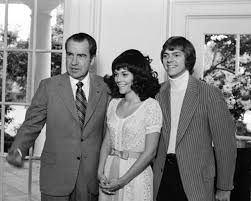 “Psst–President Nixon.  Can I have a Ritz cracker from the White House kitchen?”

According to Tom, the sibling act was poised for stardom when they were brutally cut from the last draft of CannaCorn, the second novel by Con Chapman.  “It was unconscionable,” he says, as he finishes a complimentary Brandy Alexander at the Ramadama Ding-Dong bar before their first set begins.  “We fit right into the plot, but the publisher brought in a new editor at the last minute.”  And how, this reporter asks, would their lives have been different if they hadn’t been discarded unceremoniously into Chapman’s wicker-and-wire waste basket?  “We’d be nice and cozy in a cardboard box in his basement,” the male half of the brother-sister act says bitterly, “instead of in a crummy post on a drafty blog on the internet.”

He excuses himself and the set begins when the duo launches into “Top of the World.”  Things seem fine at first, but a passing waiter distracts Sherylynn, causing her to skip a beat as she grabs at an uneaten butter pat and a packet of ketchup on his tray.  “Sherylynn,” her brother hisses at her through clenched teeth.  “I told you you could have something to eat tomorrow night!”

2 thoughts on “For This Tribute Band, Hunger for Fame Leaves One Unsatisfied”