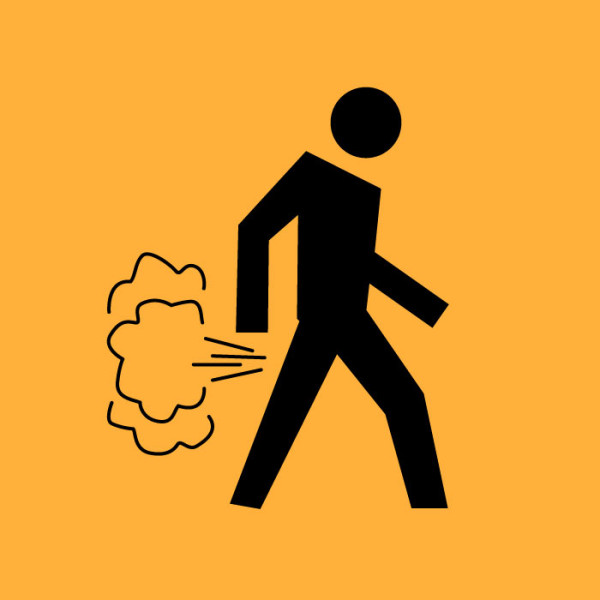 Oh, the ignominies of aging. If wrinkled skin, a drooping derriere and a lady garden that’s withering on the vine aren’t enough, there’s also flatulence to contend with.

I could heat the house
I produce so much methane
tooting my own horn.

I know, I know—talking about farts (or fahts, as we say here in Maine) is kind of cringe-worthy. But let’s be real: everybody toots. In fact, the human body produces between one and four pints of gas a day, which we release through the mouth (through burps) or our nether region about 14 times a day. It’s normal.

But it also increases with age. Why? Essentially, because our digestion slows as we get older. As a result, our intestinal bacteria have more time to turn what we eat into gases such as methane and hydrogen, which tend to build up in the lower colon before bursting on the scene.

Like in yoga class. Hell, anyone who’s taken a class knows about yoga farts, especially during certain poses (the knee-to-chest position is even known as wind-relieving pose). But it’s really annoying when the urge to cut one strikes during savasana (corpse pose)—so much for total relaxation when you’re clenching your butt cheeks trying to hold it in. Same goes for when you’re in the midst of a massage.

Then there’s when you’re out shopping. If you see me sprinting from one aisle to another at the grocery store, I’m probably trying to outrun a toot. And if I take an inordinate amount of time in the dressing room at TJ Maxx, trust me—it’s for your own good as I wait for an olfactory-offending emission to dissipate.

My husband jokes (at least I hope he’s joking) that he might not have married me if he’d known about my propensity for flatulence. A few years ago—after I abruptly adopted a vegan diet when I was diagnosed with coronary artery disease—things really did get pretty bad. All that fiber, all at once—well, let’s just say that my nicknames became Sister Flatulencia and Senorita Fartita. And I really did joke that if I could figure out a way to harness what I was producing, maybe I could heat the house. Given Maine winters, you get a sense of just how prolific I was.

But my body eventually adjusted and, since it turned out I didn’t have major coronary issues after all, I relaxed my plant-based diet somewhat, too. These days, I do avoid certain foods before social engagements (and yoga class). I practice kegels. I also try to eat more slowly and drink more fluids. And it’s helped.

Bottom line—you should pardon the expression—I’m grateful that my digestive system works the way it’s supposed to. An occasional toot isn’t a bad thing. As Benjamin Franklin once said, “Fart proudly.”

OK, fess up – what are some situations in which you’ve involuntarily let one rip?