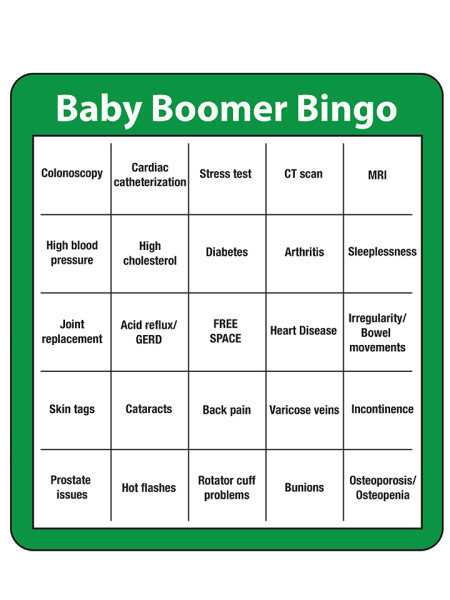 You must have noticed…we boomers have reached the age when, at social get-togethers, the conversation invariably veers to matters of health. Sometimes I wish I had a stopwatch to time just how long it takes until someone asks, “Who did your rotator cuff surgery?” or “What kind of bowel cleanse did you do for your colonoscopy?”

Never thought bowel
movements would be a topic
for cocktail parties.

In the interest of full disclosure, I admit that I’m as guilty as the next person. If someone asks me, “How are you?” I’m afraid I sometimes reply with more than, “Fine, thanks.”

I was talking about this tendency with a friend at lunch the other day (after we caught up on each other’s recent medical history, of course), and she said, “We’ve become our parents.” OMG.

But it’s true. Hubs and I recently had dinner with some friends, and they were recounting how, between them, they’d seen three doctors in one week. The husband said it’s as if his body knew he’d just gotten his Medicare card.

A few months ago, we had dinner with one of Hubs’s high school classmates and his wife, whom I’d met briefly the summer before at their high school reunion. Within 20 minutes of chatting over drinks, the conversation turned to hip replacement (his), heart valve replacement (hers) and spinal stenosis (Hubs’s).

And at a recent dinner party with two other couples I was meeting for the first time, during the cocktail hour the conversation focused on a heart issue that one of the men was dealing with. When they found out I was a medical writer, well, suffice it to say that the conversation lingered on health topics until dinner.

So it occurred to me: why not have some fun with it? When I was still working in the corporate setting, there was a (sort of) gag game making the rounds called Bulls**t Bingo. It featured a Bingo card with an assortment of corporate jargon like “paradigm,” “facilitate” and “raising the bar.” You were supposed to take the card to a meeting, check off the buzzwords as people said them aloud, and yell out “Bingo!” (or “Bulls**t!”) when you completed a row or column.

So maybe it’s time for a Baby Boomer version related to health issues. Take this to your next cocktail party or cookout, and when the organ recital begins, see how long it takes until you can yell “Bingo!” (if only to yourself). 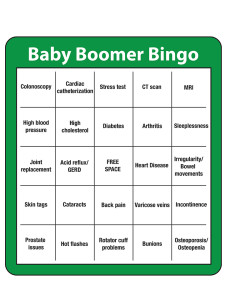 We could even have customized versions for men- and women-only gatherings, given our gender-specific health concerns. Actually, I think we tend to be more forthcoming about these concerns when we’re among people with the same genitalia—so you’re likely to hit “Bingo!” faster.

We could also have a Bingo card just for medications, since people seem to love comparing what prescription drugs and supplements they’re on (“Oh, what statin/blood pressure medication/sleep aid do you take?”).

Now, I really don’t mean to trivialize the health issues we confront as we get older. Some are truly serious—life-threatening even—and if you can’t talk about them with your friends, then what’s the point of friendship?

I just find it interesting that, twenty years ago, we generally got to know one another by sharing information about our jobs, families, interests, or where and how we grew up. These days, however, we tend to seek commonalities and bond by trading medical histories, physicians’ names, latest diagnoses and symptoms (“What foods trigger your acid reflux?”).

Believe me, I’m not judging. I’m simply observing how, for many of us, health issues consume a bigger portion of our time, attention—and conversation—as we age.

Psychologist Mary Pipher has called illness “the battleground of old age.” Viewed from this perspective, it’s easier to understand why we talk so much about health issues as we age. And talking about it is one way to cope with the fear, frustration and sense of loss we feel as our bodies decline—kind of like whistling in the dark.

So while dealing with—and talking about—medical concerns may be our new normal as we get older, it doesn’t mean we can’t find the humor in it and laugh at ourselves.